Shares of the global biopharmaceutical company Horizon Pharma plc (NASDAQ:HZNP) buckled under the pressure of the moody market last month. Specifically, the biopharma's stock fell by more than 14% in October, according to data from S&P Global Market Intelligence. 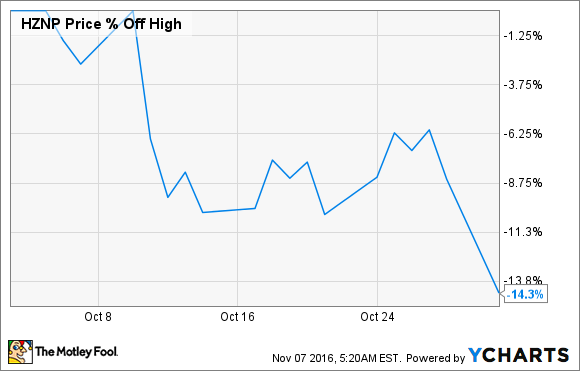 Like most of its specialty pharma peers, Horizon has struggled this year to shake off the political attacks targeting high-priced drugs -- and for good reason. After all, one of the main reasons Horizon's revenue is expected to jump by an impressive 35.6% this year is because the company has a penchant for hefty price increases. For instance, the price of Actimmune, a treatment for hereditary diseases that was originally approved in 1990, has risen by a staggering 81% since the drug joined Horizon's product portfolio in 2014.

Ginormous price increases for aging pharmaceuticals is undoubtedly a political hot potato, so to speak. But the real question is: Will this controversy translate into legislative action once the presidential election wraps up? My pessimistic, or perhaps realistic, outlook is that the answer to this question is a solid "no."

The core issue is that the pharma industry has a ton of influence in Washington, D.C., meaning that game-changing reforms are probably out of the question. And if you want solid proof of this assertion, you only have to look at how a number of major pharmas raised prices by 9% to 10% across the board earlier this year -- blatantly ignoring the potential for political blowback during the midst of a presidential election.

That's why I think Horizon is a screaming buy, especially in light of its stellar top-line growth and dirt-cheap forward price-to-earnings ratio of 5.9.