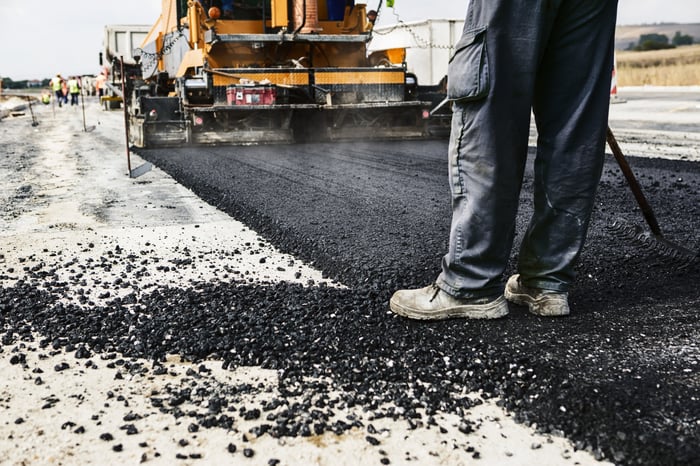 Shares of U.S. Concrete (NASDAQ:USCR), a vertically integrated national producer of ready-mixed concrete and aggregates (materials that go into concrete), are bouncing 9% higher as of 2 p.m. EST Thursday, thanks in part to an overall increase in the markets and a surprise Donald Trump victory earlier this week.

U.S. Concrete has been on my radar all year long because it seemed inevitable that America would need to improve its infrastructure at some point in the near future. U.S. Concrete stands to benefit as it generates 59% of its sales volume from selling products into commercial and industrial construction business, and another 16% from street, highway, and other public works -- and both segments seem likely to benefit from a Donald Trump presidency, especially the latter. Not only that, but U.S. Concrete has leading, or very strong, market share in some very critical infrastructure and commercial markets: New York; New Jersey; Washington, D.C.; Northern California; and Texas.

While the idea of Trump turning on the infrastructure-spending faucets has led to a quick surge in U.S. Concrete's stock price, there's plenty more to like moving forward in case the road-paving plan takes time to play out. For instance, the company is taking advantage of a fractured industry and has acquired 23 ready-mixed concrete and aggregate businesses since 2014. That's helped drive its top-line sales, and will help continue boosting its bottom line as synergies are realized.

Already, from 2011 through the trailing 12 months ended Sept. 30, 2016, the company's compound annual growth rate for revenue and adjusted EBITDA (earnings before interest, taxes, depreciation, and amortization) have checked in at 23.7% and 74.7%, respectively. While the latter figure was off a small base, U.S. Concrete has proven it can grow, and obviously the market likes its prospects even more with Trump soon to be in the White House.