Please ensure Javascript is enabled for purposes of website accessibility
Log In Help Join The Motley Fool
Free Article Join Over 1 Million Premium Members And Get More In-Depth Stock Guidance and Research
By Maxx Chatsko – Updated Nov 5, 2018 at 9:17AM

Shares of U.S. Concrete (USCR) fell nearly 29% last month, according to data provided by S&P Global Market Intelligence. There wasn't any company-specific news, although investors were awaiting the release of third-quarter 2018 earnings on the first day of November.

Considering the business had been facing more headwinds this year than in the past, and the highly cyclical construction industry was thought to be nearing mid-cycle, the stock was a prime candidate for punishment during October's step-down in market valuations. Were investors right to be pessimistic heading into the third-quarter 2018 earnings conference call? 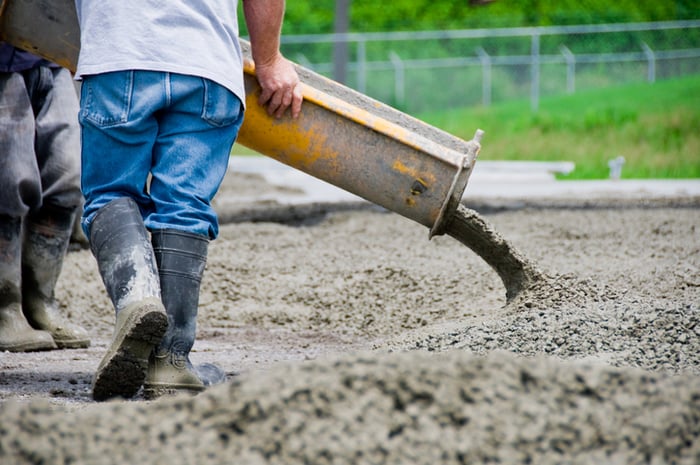 Despite all of the worries, U.S. Concrete reported a solid three months of operations in the most recent quarter. In fact, the business delivered record quarterly revenue of $404.3 million to go along with strong operating cash flow of $42.4 million. While ready-mix concrete margins slipped slightly in the third quarter of 2018 compared to the year-ago period on higher material and distribution costs, the closely watched aggregates segment put up record numbers. That's important for investors.

In late 2017, the company received a healthy amount of criticism for outbidding larger rivals to acquire a relatively small Canadian aggregates producer named Polaris Materials. Aggregate is the material that comprises the bulk of cement and must also be laid down prior to pouring concrete to allow proper water drainage. U.S. Concrete has a large presence in major Californian markets, and it pounced at the opportunity to become vertically integrated on the West Coast, but Wall Street analysts -- and even some short-sellers -- raised eyebrows. Nine months after closing the acquisition, the new unit has actually outpaced even the company's ambitious projections.

In the third quarter of 2018, the aggregates segment reported year-over-year growth of 95% in adjusted EBITDA and 114% in volume sold. Revenue, adjusted EBITDA, and volume sold all hit records thanks to the ability to sell aggregate from Polaris' operations in Western Canada into the high-growth markets in California. That should get even easier going forward after U.S. Concrete received import permits at its terminal in Long Beach, California -- leaving plenty of time to grow and prepare for the 2028 Summer Olympics in Los Angeles.

Despite the business' continued growth and strength, Mr. Market doesn't seem willing to reconsider his position on U.S. Concrete stock. Shares have fallen 56% in 2018 and have dropped 33% in the last three years. That might be a little harsh. Many large-scale construction projects are planned years in advance, which means there's a decent amount of predictability in demand for concrete and aggregate products.

Nonetheless, while the infrastructure stock appears to be trading at a discount -- the company's market cap is just $600 million, and the stock trades at 8 times future earnings -- individual investors should acknowledge that this remains a higher-risk investment, especially in a volatile market.