$1 trillion is a lot of money to spend on infrastructure. 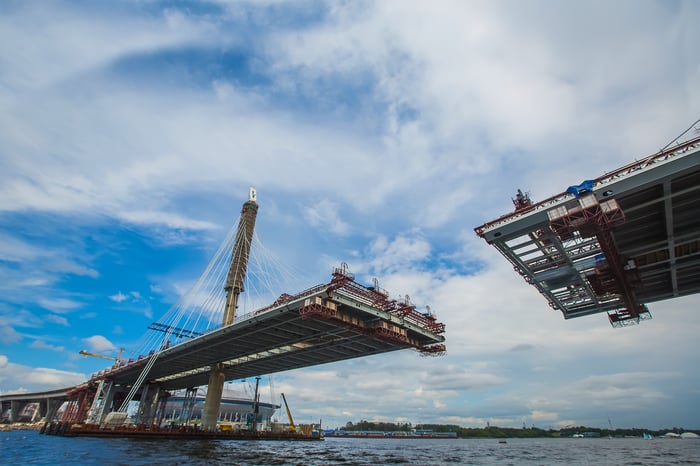 President Donald Trump is directly responsible for all these stocks' gains, with reports today that he is once again pushing Congress to enact a $1 trillion infrastructure bill.

From time to time over the last four years, President Trump has revived the idea of getting an infrastructure bill passed, each time unsuccessfully. This time around, he's couching his pet project in terms of an economic stimulus to counteract the effects of the coronavirus on the economy, and this plan may have a better chance at succeeding.

There is, for example, an existing U.S. infrastructure funding law coming up for renewal in September, which could be a vehicle for the president's proposed funding. Additionally, Democrats and Republicans are still negotiating over the contents of a proposed stimulus package worth up to $3 trillion, a second potential avenue for injecting infrastructure spending into the economy.

As suppliers of the steel and concrete backbones needed to build buildings, bridges, and roads, U.S. Steel, Cemex, and U.S. Concrete would all be logical beneficiaries of any new infrastructure spending. So $1 trillion in new spending (if it ever happens) would be great news for any of these construction industry stocks.

And it's not just steel and concrete companies that could benefit. According to at least one source, the president plans to ask for funding to build out 5G wireless internet capabilities in his infrastructure plan, in addition to the more usual roads-and-bridges spending. If you believe the president's bill has a chance of passage, this means that obvious infrastructure plays like steel and concrete might not be the only way to play the $1 trillion in government largesse. Companies like Verizon, Comcast, and even cell tower owners such as Crown Castle or American Tower could benefit as well.

If in the coming days and weeks you see these kinds of stocks begin to move as well, and cannot figure out why, it could be the Trump infrastructure proposal that's moving them.