Shares of cystic-fibrosis drugmaker Vertex Pharmaceuticals (NASDAQ:VRTX) fell 13% in October, according to data from S&P Global Market Intelligence. Despite some fairly positive news, an earnings report that failed to meet expectations dragged the biotech's share price down. Luckily, sweeping Republican victories in U.S. elections have pushed the stock right back up, recouping all of last month's losses and then some. 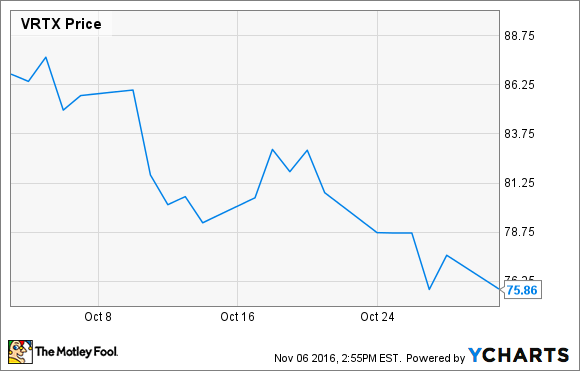 Election results also bode well for Vertex Pharmaceuticals and drugmakers across the board. The defeat of Proposition 61, which would have created a potential model for lowering prescription-drug spending, and Republican control of Congress and the White House eased concerns about potential price controls going forward.

On a per-share GAAP basis, the $0.17 loss during the third quarter was much narrower than the $0.39 shortfall reported during the same period last year, and there are plenty of reasons to expect the trend toward profitability to continue. Perhaps the most obvious reason is the recent FDA approval for expansion of Orkambi's U.S. label to include patients aged 6 through 11 years old with two copies of the F508del mutation. This will expand the therapy's eligible U.S. population from about 8,500 to around 11,000.

More recently, Vertex announced success in a phase 3 trial designed to satisfy European regulators. If the application to include children aged 6 through 11 on Orkambi's EU label earns a widely expected approval, it will expand the therapy's addressable population in the region by another 3,400 patients.

While Orkambi expands to the largest group of cystic fibrosis patients, Vertex will continue its gargantuan effort to develop therapies to address all 2,000 known mutations associated with the disease. Along with third-quarter earnings, Vertex announced plans to begin separate clinical studies with two next-generation correctors, VX-440 and VX-152, in combination with Kalydeco and experimental tezacaftor.

The company expects data from both triple-combo studies in the second half of next year. In the meantime, investors will want to keep a close eye on Vertex's research and development budget. Unchecked R&D spending could pull the stock down even further. At the upper end of the company's guidance range for product sales and operating expenses, which includes R&D, it's expecting an operating profit around $465 million this year. Orkambi's recent expansions should give its top line some room to grow, but it is limited.