During the course of his presidential campaign, Donald Trump railed against trade with Mexico, arguing that it has destroyed American manufacturing jobs. Thus, Trump's upset victory in the U.S. presidential election caused the Mexican peso to tumble on Wednesday, as investors worried about the potential impact on Mexico-U.S. trade relations. 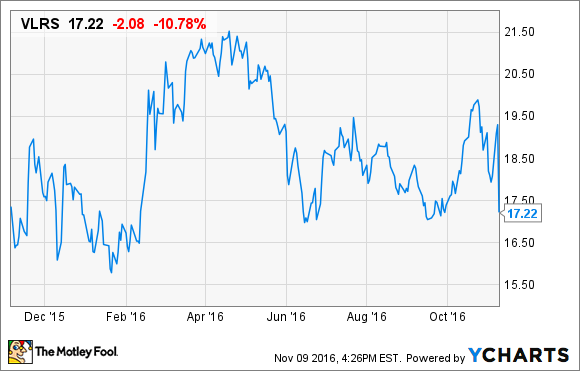 For the most part, it's still too early to know how (or if) President-elect Trump's policies will affect the economy and financial markets. However, one thing does seem quite likely: a downturn in Mexico-U.S. trade. The result has been a steep decline in the value of the Mexican peso.

That's bad news for Mexican airlines like Volaris. Most of Volaris' expenses are dollar-denominated, including the cost of fuel, aircraft rent, and spare parts. Meanwhile, most of its revenue comes in pesos. As a result, a weaker peso makes it harder for Volaris to cover its costs.

The falling peso was aggravating other cost inflation pressures at Volaris even before this week. With the peso falling to a new all-time low, it now seems likely that costs will rise significantly again in 2017. This will likely lead to a year-over-year earnings decline for Volaris next year.

The weak peso is likely to hurt Volaris' profitability in 2017. Image source: The Motley Fool.

Donald Trump's victory -- through its impact on the peso's value -- could have a much greater impact on profitability at Volaris than will be the case for most companies. Nevertheless, it's important to recognize that every Mexican airline will face similar cost headwinds. Furthermore, air travel demand has been rising rapidly in Mexico in recent years.

As long as the demand environment remains relatively firm, Volaris -- as the lowest-cost airline in Mexico -- should be able to recover its margins over time by gradually raising prices. Volaris has huge growth opportunities ahead of it, and I plan to hold my stock for many years to come to take advantage of that future growth.