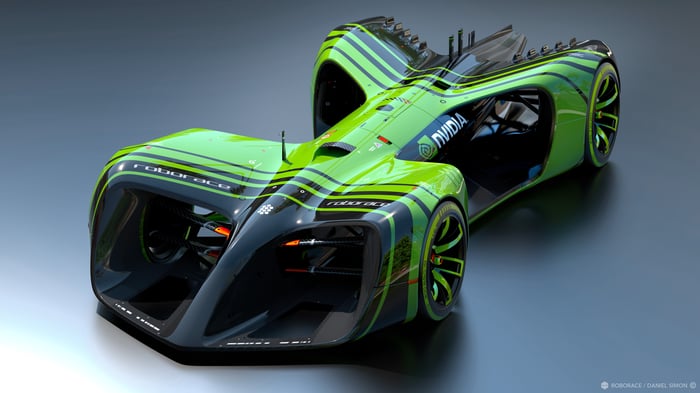 It's easy to get excited about driverless cars. The technology promises to offer mobility to millions of people who can't drive themselves around, and the vehicles are expected to make our roadways exponentially safer by reducing vehicles deaths by 30,000 each year in the U.S. On top of those benefits, companies getting on board with driverless cars are building a massive industry that'll be worth $77 billion by 2035. NVIDIA (NASDAQ:NVDA) is poised to benefit from all of this through its popular Drive PX 2 semi-autonomous driving platform, and its GPUs that can turn camera images into actionable information for self-driving systems.

But investors looking to jump into NVIDIA's stock based on just the company's opportunities in the driverless car market should keep these three things in mind:

1. These are volatile partnerships

NVIDIA recently forged a crucial partnership with Tesla Motors (NASDAQ:TSLA), which will use its supercomputing platform and some of its GPUs in its semi-autonomous driving system. It's a big win for NVIDIA and a testament to the company's class-leading technology.

But investors may remember that just four months ago it was Mobileye's (NYSE:MBLY) technology that was helping to bring about Tesla's driverless car future. After a Tesla Model S very publicly crashed while in semi-autonomous driving mode, Mobileye decided to end its relationship with Tesla.It was a demonstration that sometimes, the companies building this driverless car future can see their partnerships quickly sour in the wake of public technology failures.

As a The Wall Street Journal article commented at the time, "The friction between Mobileye and Tesla reflects emerging tension between developers of cutting-edge auto technology and car makers over who owns or directs development of their technology."

The two companies ultimately disagreed on what exactly caused that Model S crash, and Mobileye claimed Tesla was pushing the envelope too much on what was safe for drivers. All this applies directly to NVIDIA as well, considering that more than 80 automakers and tier 1 automotive suppliers use its technology. Any public mishap with self-driving tech could shatter lucrative deals, much as it did with the one between Mobileye and Tesla.

2. This is still a big, long-term bet for NVIDIA

Of course its very Foolish to take a long-term perspective on investing. But betting on NVIDIA right now simply because there could be lots of driverless cars in the future isn't exactly a sound investing thesis.

The potential to benefit is there, of course. IHS Automotive anticipates that there will be 76 million partially and fully self-driving cars on the road by 2035, and those tech companies getting in on the ground floor now could certainly benefit.

But those figures are estimates for nearly 20 years in the future, and a lot could change between now and then. Strict laws, public apprehension, and security flaws are just a handful of potential roadblocks for the driverless car market. In short, investors would be betting on a future that doesn't yet exist.

3. It's not the company's most lucrative business

NVIDIA makes about 8% of its revenue from its automotive segment, and most of that is on GPUs used in infotainment systems, not self-driving car tech. While its automotive segment revenues grew 61% year over year in its fiscal Q3 2017 (which ended Oct. 30), they don't even come close NVIDIA's gaming revenue.

The gaming segment accounted for $1.24 billion in revenue last quarter, representing about 62% of the pie. That was followed by data center revenue at about 12% and professional visualization at just over 10%. You probably get the idea by now: Automotive tech is still a fairly small part of what this company does.

It's certainly great to see NVIDIA making early investments and becoming a major player in the driverless car market, but investors should remember that its priorities still lie elsewhere.

I've written plenty of times about why NVIDIA is a great driverless car tech play, and I still think that it is. The company is forging strong relationships in the space, and continues to release new versions of its self-driving platform that appeal to its customers. But investors should keep mind that this market is still in a very early stage, and NVIDIA has plenty of other things going for it (that are much more lucrative). For now, it may be best to consider the company's self-driving car tech as the icing on the proverbial cake.

3 Reasons Why You Shouldn't Invest in NVIDIA Based Solely on Its Driverless Car Tech @themotleyfool #stocks $NVDA $TSLA $IHS.DL $MBLY Next Article
Current