Shares of FormFactor (NASDAQ:FORM) fell 17.3% in October, according to data from S&P Global Market Intelligence. The month was working out just fine until Oct. 27, where the maker of engineering-oriented testing tools reported its third-quarter results. The next day, share prices plunged as much as 12% lower.

In the third quarter, FormFactor's sales raced 87% higher year over year to land at $123 million. Adjusted earnings nearly quadrupled to $0.22 per share. The recently closed acquisition of testing-tools rival Cascade Microtech drove the fundamental financial figures sky-high. The results were also on the high end of management's guidance.

However, the company's fourth-quarter projections pointed to lower sales in the crucial probe card division, putting a damper on the quarter's total revenue guidance. Moreover, the absolute top end of FormFactor's earnings guidance was below the then-current average analyst estimate. That's why share prices took a steep tumble. 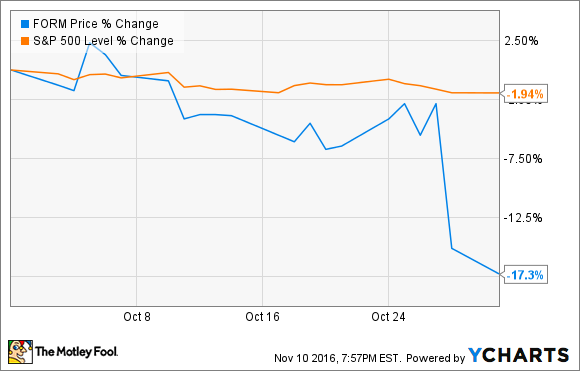 Before crying crocodile tears over FormFactor's investors, you should consider that the stock roared into this report on a full head of steam. Before releasing the third-quarter report, FormFactor had gained a market-beating 17% year-to-date. Even now, FormFactor is back to above-average 2016 returns.

Trading near $10 per share today, FormFactor is a long way away from rebuilding the glory days of 2007 when share prices peeked over the $45 level. The Cascade deal is an earnest attempt to create economies of scale, which eventually should help the company's profit margins as well.

For now, FormFactor is a work in progress with a lot to prove.