Retail stocks have had an up-and-down year in 2016, with retail sector giants seeing volatile swings and the XRT SPDR S&P Retail ETF down roughly 4% year to date.

While retail as a whole is facing changes that expose some of its biggest names to challenging pressures, avoiding the sector entirely would probably cause investors to miss out on some worthwhile opportunities. Here's why Amazon.com (NASDAQ:AMZN) and Home Depot (NYSE:HD) are top retail stocks to buy.

Amazon is down roughly 5% after its third-quarter earnings came in below analyst expectations and were accompanied by earnings target reductions.. Increased shipping expenses and investment in new warehouses and video services are driving up operating costs, but the pullback could be a good opportunity to take a long-term stake in the leading online retailer.

While only around 8% of U.S. retail sales are conducted over the internet, online-based business is reshaping how purchases are made. That transformation is just getting started, and no company has a bigger role in it than Amazon. Founded as an online bookseller in 1994, the company now hosts an internet marketplace for an incredible range of goods and appears to be well on the way to achieving its goal of being "Earth's most consumer-centric company."

The company's most recent quarter posted 29% year-over-year sales growth, and looking further back, its retail component accounted for a whopping 60% of U.S. online sales growth in 2015, and with projects such as grocery services, enterprise retail, and drone delivery still in the early stages of rolling out, the company still has huge growth avenues ahead of it. At the heart of Amazon's incredible success is a willingness to take big risks and reinvest in itself to deliver a comprehensive service that keeps users locked into its ecosystem.

Delivering great value with its $99-per-year Prime subscription service has helped it grow membership from an estimated 10 million in 2013 to an estimated 63 million as of July -- per an estimate by Consumer Intelligence Research Partners. Growing the service is costing Amazon in the short term, but it looks to create sustained competitive advantages. Prime users are estimated to spend more than twice as much as non-members, and research suggests that members become more engaged over time.

The company's focus on expansion has kept profits low -- with its stock trading at roughly 160 times forward earnings estimates, but the competitive strengths it's building are undeniable. The focus on growth and reinvesting in new and established segments makes trying to project Amazon's earnings and value the company accordingly something of an exercise in futility at this stage.

The business's incredible growth rate and track record of innovation make it a stock that's worth owning, even as shares trade at lofty earnings multiples. It's also worth pointing out that buying Amazon stock doesn't just get you a stake in a market-leading online retailer; it also gets you a position in the leading cloud-infrastructure-as-a-service provider, Amazon Web Services, which grew revenue 53% year over year in the most recently reported quarter, and a company that's shaping the smart-home space with its Echo hardware.

Home Depot is the leader in the home-improvement retail space and looks to be well-positioned to weather changes in retail and continue delivering strong performance for investors. In addition to building up its in-home installation services as a buffer against the threat of competition from Amazon and other rivals, Home Depot is making strides in creating integration between its internet-based and bricks-and-mortar businesses.

The company's last quarterly report saw it grow online sales 19% year over year, and roughly half of online orders are picked up by customers at a store location. By converting online orders to in-store traffic, Home Depot creates the opportunity to generate additional sales, and that type of synergy points to an ability to thrive even as online rivals increasingly target the space.

Opting to invest in store quality rather than growing store count has been one of the company's smartest moves in recent years and has been a major factor in outperforming the earnings growth of rival Lowe's. As fellow fool.com writer Jeffrey Bowman has pointed out, building more bricks-and-mortar locations won't help in combating rising threats from other online-based retailers, but improving its existing locations can create reasons for customers to visit stores and increase margins. 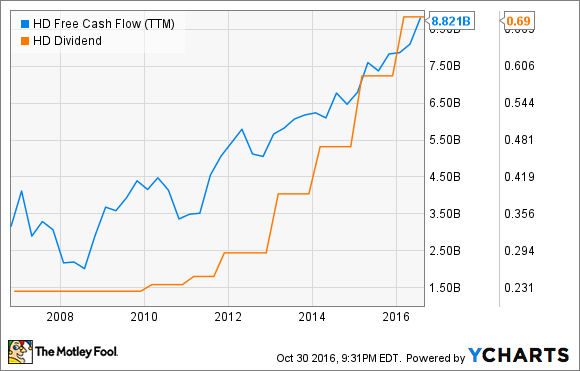 Home Depot stock is also worth considering for its dividend. With a yield of roughly 2.3% at current prices, the stock is in line with the 2.15% average yield of dividend-paying S&P 500 companies. However, the company is generating strong cash flow, and it looks as if there's plenty of room for dividend increases down the line. Home Depot has raised its payout by 138% over the past five years, and its payout ratio sits at just 43.7%.

With the company guiding for an increase from $88 billion in revenue in 2015 to $101 billion in 2018, improved supply chain efficiency bolstering margins, and an ongoing share-repurchase initiative, Home Depot looks primed to continue delivering solid earnings growth and boosting income returned to shareholders.

Trading at roughly 19 times forward earnings estimates, Home Depot looks to be a great company at a fair price.