A couple years ago, it really did look like NVIDIA's (NASDAQ:NVDA) Tegra business was on the ropes. After years of trying to compete in mobile devices, it simply couldn't keep up technologically with Qualcomm, and not for a lack of trying. NVIDIA had high hopes of integrating cellular connectivity following its 2011 Icera acquisition, which was necessary to be relevant in smartphones.

Over the years, NVIDIA had spent billions of dollars developing Tegra, so when it announced that it was getting out of smartphones in 2014 and pivoting the Tegra business to automotive applications, there was all sorts of uncertainty regarding the Tegra business. After all, it's not uncommon for strategic pivots to fail. In itself, NVIDIA's smartphone exit wasn't too surprising; Texas Instruments had bailed on mobile processors just two years prior, for many of the same reasons.

The depth of Tegra's troubles culminated in fiscal Q2 2014, when sales bottomed out at a meager $53 million, down 71% year over year. Here's a snippet from NVIDIA CFO's commentary that quarter:

These decreases were largely due to lower unit shipments of Tegra 3 processors as customers ramped down production of Tegra 3-based smartphones and tablets, as expected. They also reflect lower revenue associated with the sale of embedded products and game consoles, offset by increased revenue from automotive products. During the second quarter, we ramped up production of our next-generation processor, Tegra 4, in support of new devices coming from our customers in the second half. On July 31, we also began customer shipments of SHIELD, our new NVIDIA branded gaming and entertainment device.

If NVIDIA's pivot to automotive and game consoles failed, that would translate into billions of dollars lost to Tegra development. At this point, I think it's safe to call it, though: NVIDIA has pulled off a stunning recovery for Tegra.

Last quarter, Tegra sales soared 87% to $241 million, driven by both gaming development platforms and momentum in automotive. Of that total, a little over half ($127 million) came from automotive infotainment modules. 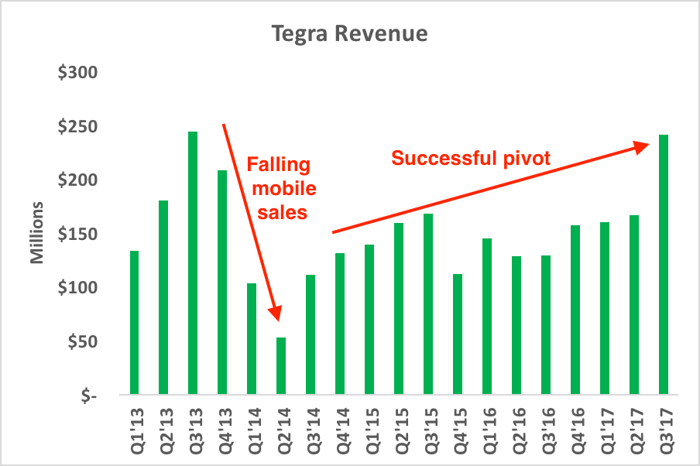 That's what I call a successful pivot.

To be clear, the Tegra business still operates at a loss, posting an operating loss of $239 million last fiscal year, as the company continues investing in Tegra's future. But the losses are mitigating. NVIDIA only lost $52 million in Tegra operations in the first half of this fiscal year (detailed fiscal third-quarter operating income data by segment won't be available until NVIDIA files its 10-Q).

It used to be unclear whether or not NVIDIA would pull this off, and frankly I had my doubts. But the numbers now speak for themselves.