At NVIDIA's (NASDAQ:NVDA) GPU Technology Conference, NVIDIA CEO Jen-Hsun Huang made it quite clear that the company had no further intentions of competing in the highly integrated, cost-sensitive mainstream smartphone applications processor market. With that in mind, an obvious question to ask is whether the company would just go ahead and de-focus its development efforts on the actual cellular modem part of the equation.

David Wong: Chris ... you've exited mainstream smartphones, so where does that leave your baseband capabilities?

Chris Evenden: So we still need the baseband ... if only for automotive. I mean, connectivity is going to become increasingly important in all of those markets. So, we'll keep developing a standalone baseband, voice and data; we're not going to develop an integrated modem/applications processor. That product, you've got one target market in mind, which is mainstream smartphones.

So, we actually get two interesting tidbits of information. First is that NVIDIA does plan to continue developing its own standalone baseband chips (useful for high-end phones, tablets, and -- the star of Tegra's show -- automotive). Next -- and perhaps not surprisingly -- is that the company no longer plans to try to go head-to-head against the remaining players in the integrated apps processor and cellular baseband space.

RIP Tegra 4i
While there had been some encouraging early signs for the company's Tegra 4i (integrated apps processor and baseband), it looks as though the part ultimately failed to gain enough traction to continue developing successors. The problem here, and one that many had feared would ultimately be the case, is that this market is all about bringing in the cheapest, most integrated chip at the lowest possible cost. 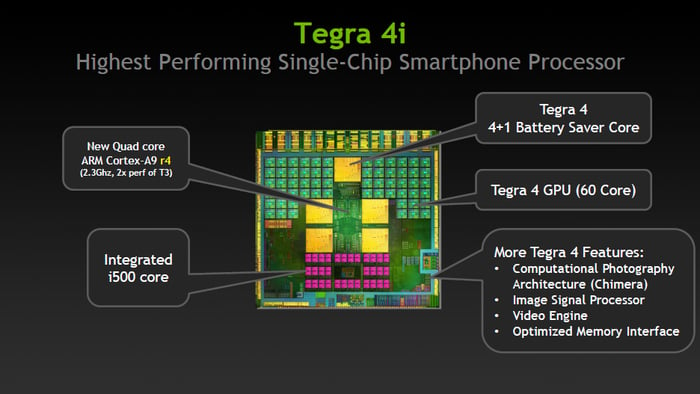 NVIDIA's ill-fated Tegra 4i; we barely knew it. Source: NVIDIA.

Note that while NVIDIA does have its own cellular modem efforts, it doesn't have in-house Wi-Fi, Bluetooth, GPS, and the like to really be able to compete at the integration level with Intel (NASDAQ:INTC), Broadcom, MediaTek, Marvell, and Qualcomm (NASDAQ:QCOM) -- all of which do have this connectivity IP. NVIDIA likely could have picked up some connectivity IP with its cash hoard (and I had actually been expecting it), but it didn't happen.

Tegra 4i will apparently be NVIDIA's last integrated modem and applications processor, with no successors on tap.

Who's next?
MediaTek is currently selling a lot of product but is very vulnerable, as it appears to be significantly behind both Qualcomm and Intel in modem technology (the latter two are preparing to ship category 6 LTE-Advanced modems while MediaTek won't have a shipping category 4 LTE modem until Q2 2014). Broadcom has struggled pretty heavily, as its investment in cellular has largely destroyed the profitability of its connectivity business -- something will need to give soon. Marvell has done well in the low margin/highly competitive low end, but it seems to not be interested in the high end.

While there's the possibility that Qualcomm simply ends up eating up the lion's share of the market, Intel is investing at roughly the same level and can tolerate extreme losses in order to eventually win -- something that the smaller players can't really afford to do. Intel is buoyed (and R&D amortized) by the very profitable PC and server segments that use much of the same IP that is designed for mobile. Qualcomm has its IP licensing business to hold the line on profitability.

Foolish bottom line
The consolidation will be a long, slow, and heartbreaking process for many stockholders and employees, but we have seen this across semiconductors time and again. NVIDIA has gracefully bowed out of the "mainstream smartphone" ring, but it will continue to develop cellular modems for the other Tegra applications. These other Tegra applications likely won't require as bleeding-edge modem technology, so ultimately the investment level NVIDIA will be putting into its modems will shrink, freeing up cash for more profitable ventures.