Through the first quarter of 2016, Citigroup (NYSE:C) has bought back 117 million shares, which is more than 4% of the current outstanding total. Even though the company has spent more than $5 billion on buybacks, shareholders are paid a paltry dividend yield of just 1.2%. However, while this may seem strange at first, it's a great move for investors.

Low dividends but big buybacks in 2016

In 2016, Citigroup has returned approximately $6 billion in capital to its shareholders, but less than $750 million of this was in the form of dividends. The company bought back about 117 million of its shares at a total cost of more than $5.2 billion.

This may seem unfair to dividend investors. After all, the company's $0.64 annual dividend rate translates to a yield of just 1.2% at the current share price. It's clear that Citigroup has chosen to prioritize buybacks to dividends, and there's a good reason for this.

Why Citigroup investors should be thrilled

In a nutshell, Citigroup investors should be thrilled about this because of the stock's low valuation. As of the end of the third quarter, Citigroup's book value was $74.51 per share. Even when you exclude intangible assets, the company's tangible book value was $64.71.

As I write this, Citigroup trades for $52.25, so even accounting for the post-election boost to the banking sector, the company trades at discounts of 20% and 30% to its tangible book and book values, respectively. In other words, Citigroup can buy back its own assets for $0.70 on the dollar. This is like if you had the opportunity to buy as many $100 bills as you wanted to for just $70 apiece. Doing so would instantly create $30 in value for every one you bought -- the same principle applies here. 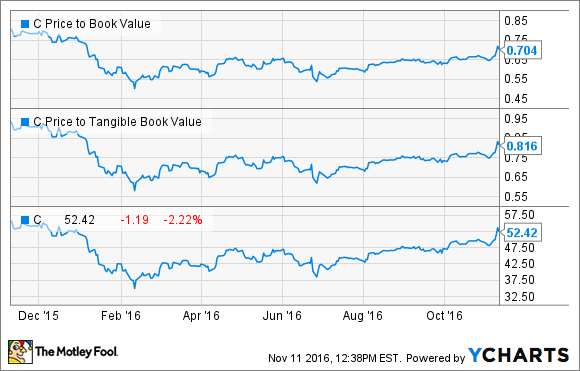 To make the situation even better, you'll notice in the chart that Citigroup has been trading for significantly less for most of 2016, while these buybacks were taking place. In fact, based on the buyback information in each of Citigroup's three quarterly reports so far this year, the average price the company paid for one of its shares is just over $45.

Now, it's important to mention that Citigroup is cheap for a reason. It's a relatively risky bank that hasn't done a great job of generating acceptable profitability in recent years. This is by no means a low-risk stock. Even so, it's tough to take issue with the instant value creation that results from large buybacks of cheap stock.

As long as Citigroup trades for a discount to the value of its assets, I fully expect the company to continue to prioritize buybacks. Looking forward, Citigroup increased its dividend to $0.16 per share (about $1.8 billion per year), but the company also increased the size of its buyback authorization to $8.6 billion over the year starting with the third quarter of 2016.

If Citigroup rises dramatically, management's capital-returning strategy might change, but for now, investors should be happy that the company is maximizing shareholder value by repurchasing billions of dollars of stock.