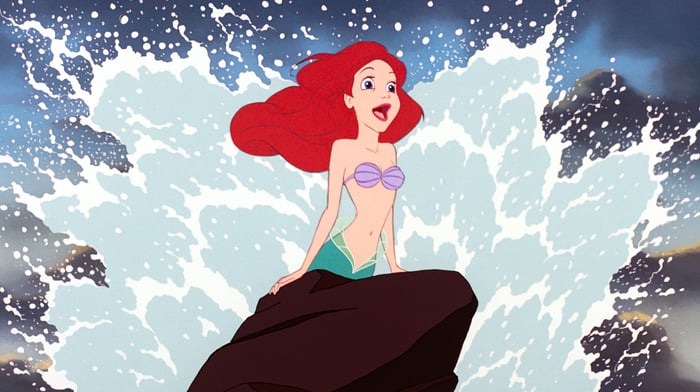 Disney's (NYSE:DIS) upcoming live-action remake of its animated classic The Little Mermaid doesn't have a publicly announced release date yet, but the picture looks primed to deliver a massive box-office performance when it swims into theaters.

With great source material and Disney's recent track record of success in delivering updated takes on old hits, the picture has a strong chance of passing $1 billion in global ticket sales and creating ripple effects that benefit the company's theme-park and consumer-goods segments.

And with the writer and star of Broadway sensation Hamilton on board to craft the picture's tunes, the project has another element working in its favor: the power of song.

Released in 1989, The Little Mermaid stands as one of Disney's most loved and enduring films. It grossed $211 million worldwide. It might also be one of the Disney films best-suited for a modern revival. With a recent string of female-powered hits and the strength of Disney's Princess brand, the return of Ariel and friends to the silver screen looks to ride nostalgia and favorable audience trends to event movie status. The picture's underwater settings could also make for great visuals and set the stage for strong 3D ticket performance.

Thus far, the company's live-action reimaginings of past classics have a stellar quality and commercial track record. The 2011 release Alice in Wonderland did more than $1 billion in global ticket sales, 2014's Maleficent grossed nearly $760 million and earned an upcoming sequel, last year's Cinderella managed $544 million in ticket sales, and this year's The Jungle Book recorded $966 million at the box office and spurred a sequel into development. Alice Though the Looking Glass stands as the only real underperformer in Disney's recent installments in classic franchises, but the film will probably be a rare misfire among a mostly successful line of series revivals.

The company's slate is packed with likely winners, and The Little Mermaid looks primed to be a standout.

Lin-Manuel Miranda's Broadway smash Hamilton is the biggest show to hit the stage in decades, and The House of Mouse has brought the songwriter and actor on board for its revivals of The Little Mermaid and Mary Poppins. Ariel's voice and love of song were central to the plot of the original Little Mermaid, and the upcoming remake looks to be the first of Disney's live-action reimaginings of its animated properties to make song a central part of its appeal. While it's too early to say with certainty how the project will turn out, having Miranda on board is a promising sign.

A popular song can have a major impact on a film's success. Sony's last two James Bond films benefited from having hit songs that played on radio airwaves, spurred downloads, and streamed hundreds of millions of times -- creating promotional effects for their respective films and generating money as stand-alones. However, Disney's megahit Frozen presents the best recent example of a song powering a film and taking on a life of its own.

Let It Go, Frozen's most popular tune, helped the film achieve iconic status and over $1.2 billion in global ticket sales. For months following the movie's release, Let It Go was nearly inescapable, and the song helped make the single and the film's collected soundtrack top sales chart performers. The soundtrack managed to hang in the Billboard Top 10 for 39 consecutive weeks and became the top-selling album of 2014. Frozen and Let It Go are now staples at Disney parks and cruise ships and point to value in a return to the company's musical roots. The House of Mouse has a catalog of great songs that are an integral part of its history, and the upcoming Little Mermaid remake stands a good chance of adding to that legacy.

Disney's upcoming remakes will have impacts beyond the box office

In addition to its upcoming Little Mermaid, Disney is also set to introduce new versions of past animated classics, with Beauty and the Beast bowing on March 17, Mulan releasing Nov. 2, 2018,, and The Lion King and Aladdin in production for currently unspecified dates. All of these projects have built-in box office draw, as well as the potential to boost other segments at the company.

Studio entertainment accounted for just 18% of Disney's revenues in its last three quarters, but its movie releases help shape the performance of its other businesses, particularly by driving foot traffic at its theme parks and resorts and boosting merchandise sales. Disney's characters are the glue that ties its theatrical, theme-park, and consumer-products divisions together, and the company is on a major winning streak when it comes to creating new characters and reintroducing existing favorites.

Disney's media-networks segment, which accounted for roughly 42% of revenue in the company's last three reported quarters, is struggling amid changes to the subscription-based TV landscape. ESPN, its marquee network, looks to be especially hard hit, and the company will probably have to lean on its other segments to drive overall growth going forward.

With those challenges at hand, reintroducing successful properties such as The Little Mermaid has become increasingly important for the company. Luckily for Disney and its investors, it has a very strong array of franchises to work with and stands a good chance of scoring big hits with its slate of updated takes on animated classics that create spillover effects from the box office to its other segments.