Shares of Netflix (NASDAQ:NFLX) rose 26.7% in October, according to data from S&P Global Market Intelligence. The boost came from a solid third-quarter report.

In the third quarter, Netflix added 3.6 million net new subscribers -- 55% above management's own guidance targets. Sales increased 32% year over year and GAAP earnings jumped 75% higher, setting the company on a clear path toward a promised slate of "substantial profits" in 2017.

Looking ahead, the fourth quarter should see 5.2 million new subscribers on a global level. That would result in a total of 91.9 million global members, a 23% year-over-year increase paired with 40% higher revenues. 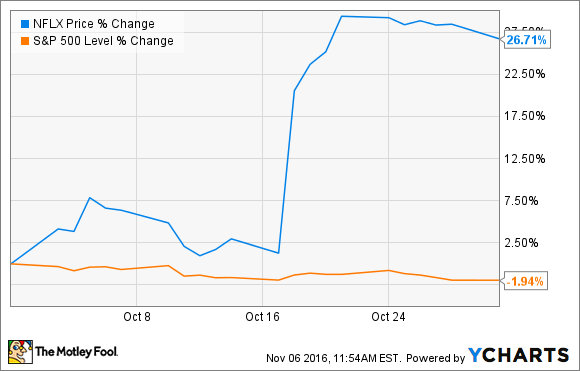 With this report, Netflix showed solid evidence that modest price increases are not scaring away unreasonable amounts of service members. Most of the company's worldwide markets have only been aboard since January and won't run a profit for several years, but there's no need to panic about that. CEO Reed Hastings has a detailed long-term plan in mind, and the early market-building phase is now over (except for finding a pathway into China, of course).

Netflix remains the largest holding in my personal investment portfolio and is likely to stay that way for years to come. I can't wait to see the market reaction when Hastings finally outlines the size of his long-expected 2017 profits -- and that's still just the start of a global entertainment empire in the making.