After a seemingly constant stream of discussion by the media, it's hard not to have heard of the Internet of Things. The trend of connecting everything to, well, almost everything else is expected to unleash a torrent of innovation and new profit opportunities for investors in the years and decades to come.

Case in point: IT giant Cisco predicts the number of connected devices will double from 25 billion to 50 billion by the end of the decade. Researcher IDC expects the market for IOT-related technology will total $1.7 billion by 2020. Even if you find these estimates remarkably bullish, the trend and its eventual financial impact are real. As such, here are three great stocks to buy today to ride the expansion of the Internet of Things. 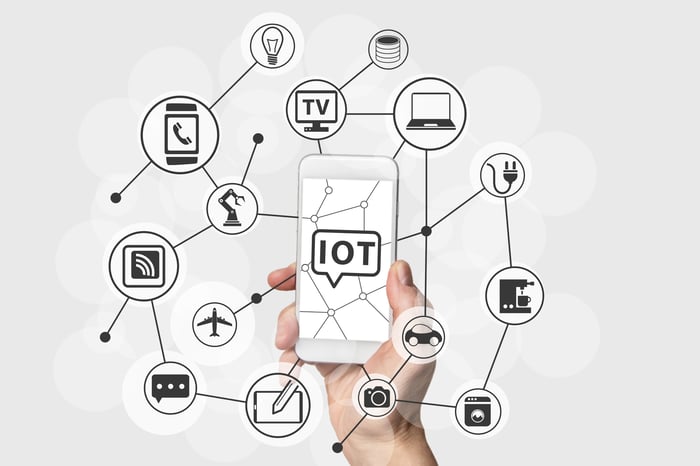 I've long admired mobile chip power Qualcomm (NASDAQ:QCOM) on its own merit, and its recent decision to acquire IoT semiconductor leader NXP Semiconductor (NASDAQ:NXPI) is one of the smartest tech buyouts in recent memory.

NXP Semiconductor's leadership across several growing sub-segments of the semiconductor market should prove a long-term financial tailwind for Qualcomm investors. Though NXP's revenue base is roughly a quarter the size of Qualcomm, NXP's impressive 25% profit margin should help diversify Qualcomm's own shrinking, but still sizable, margin profile.

Furthermore, NXP's deep specialization in secure connections also leaves the door open for future product development in areas few can predict in the decades to come. As the market for secure connected chips continues to grow and spawn new product verticals, NXP and Qualcomm figure to benefit mightily from the continued rise of the Internet of Things. Better yet, Qualcomm's 17 times price-to-earnings ratio is surprisingly cheaper than the broad market indices, and its 3.1% dividend yield offers another compelling driver of potential returns.

In an era of ever-shrinking chip sizes, Skyworks Solutions (NASDAQ:SWKS) stands as a giant. A major supplier to smartphone giants like Apple and Samsung, Skyworks has seen the continued penetration of mobile devices and wearables help fuel its steadily rising sales. Thanks to this trend, Skyworks Solutions has grown its sales from $1.5 billion to $3.2 billion in just three years. Better still, the inherent operating leverage in Skyworks' business model has allowed profit growth to outpace sales growth by a wide degree over the same period, and this trend of continued growth shows little sign of slowing.

Thanks to its specialization in helping chips of all types perform their computing tasks with less space and power, Skyworks' technological skillset beautifully overlaps with the Internet of Things, a trend that is fundamentally predicated on putting small sensors in as many devices as possible. By its own reckoning, Skyworks believes that by 2020, there will be over 2 billion smartphones, 1 billion personal computers, and over 43 billion IoT devices. The growth opportunity facing this IoT stock is simply tremendous. Better still, Skyworks Solution shares trade at just 14 times their current earnings, making it a highly affordable way to invest in the continued expansion of the Internet of Things.

Though perhaps we don't think about it in such explicit terms, a future involving IoT devices like self-driving cars, autonomous delivery drones, and robot workers needs a way to keep them from crashing into one another. Thankfully, because of its long-standing expertise in graphics processing chips or GPUs -- the hardware innards responsible for converting images into computing data, or vice versa -- NVIDIA (NASDAQ:NVDA) seems poised to address this easily overlooked but critical need. 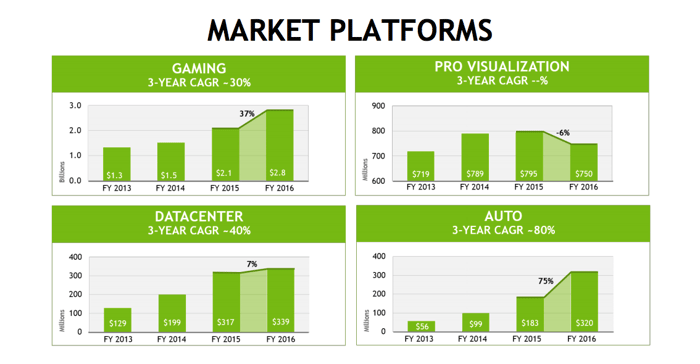 NVIDIA's shares trade at an admittedly steep valuation; its 55 times P/E ratio stands as more than double the S&P 500's 24 P/E multiple. However, analysts expect NVIDIA earnings per share to grow at nearly 24% annually for the next five years, which should provide ample profit growth to support sustained share price appreciation. Better still, NVIDIA has paid a small but growing dividend since 2012, making it a fantastic way to invest in the Internet of Things in addition to Qualcomm and Skyworks Solutions.