The National Highway Traffic Safety Administration estimates that airbags save on average 2,000 lives a year. While it might not be as significant as the use of seat belts, use of which the transportation agency says reached almost 90% last year, they have still done their part to make our roads safer.

But that's only if they work, and Takata (NASDAQOTH: TKTDY), the world's biggest manufacturer of airbags, is teetering on the edge of bankruptcy that could leave automakers like Ford (NYSE:F) and General Motors (NYSE:GM) with a $10 billion liability if it goes under. 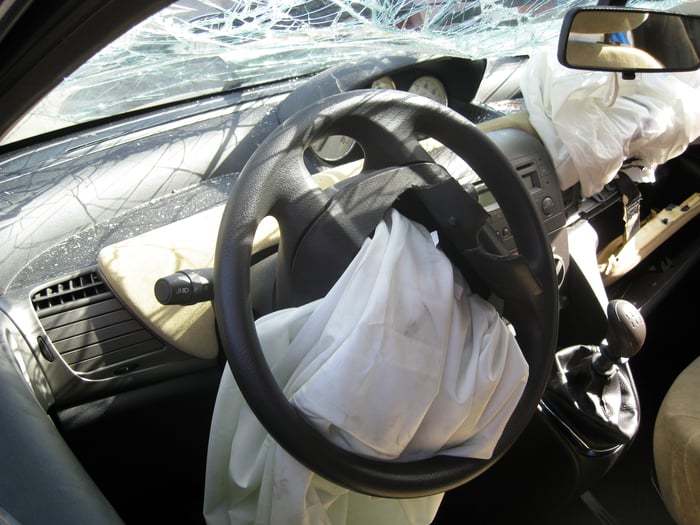 Takata has had to recall almost 69 million airbags because of a defect with the inflator that can result in the ejection of shrapnel when the bags are deployed. It is the largest recall in automotive history.

The manufacturer uses ammonium nitrate to create an explosion that inflates the airbags, but the chemical degrades the metal canister it's contained in when exposed to heat and humidity, so that when activated the device blows apart, sending metal shards everywhere. To date, the inflators have killed at least 16 people worldwide and injured more than 100.

In 2015, the NHTSA imposed a $200 million civil penalty against Takata, the largest in its history, for violating the Motor Vehicle Safety Act. It also used for the first time its authority to accelerate recall repairs to millions of affected vehicles.

Takata has been sent reeling, with its shares losing some three-quarters of their value on the Nikkei exchange. It has ended up selling the ownership stake it had in car companies such as Honda, Toyota, and Nissan, as well as its interiors business. While a bankruptcy filing of its U.S. unit might help the parent find a buyer and would allow it to continue supplying parts as it works on an out-of-court reorganization, the possibility Takata itself ends up having to seek court protection is still real. 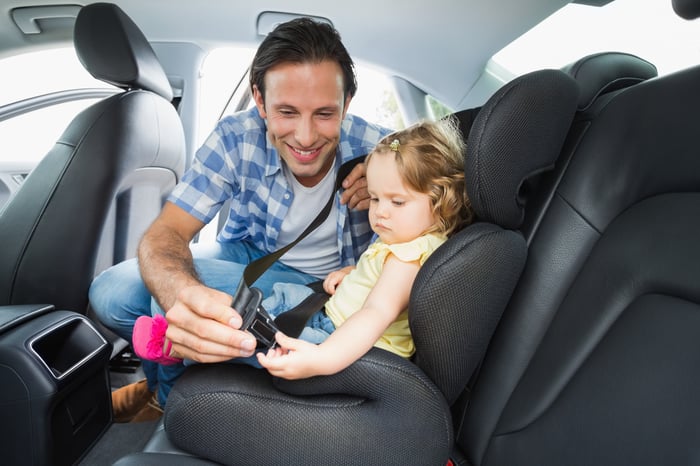 Still, a number of companies are vying to take over Takata's business as the airbag manufacturer sought to find a buyer earlier this year. Some of them that were initially pushing for a bankruptcy filing have reportedly withdrawn the demand. There had been five companies involved with bidding on Takata's assets, but after private-equity firm KKR (NYSE:KKR) dropped out, the field was reduced to four:

The only bidder still pushing for bankruptcy is Daicel, which supplies some airbag inflators to Takata, and its partner Bain. According to reports, automakers -- which are essentially the creditors of Takata -- are mulling over the bids and will shortly reduce the number of potential buyers to just three, which will then begin a final round of negotiations.

However, with Daicel likely one of the leading bidders, it could put the automakers in a bit of a bind.

Autoliv is the largest manufacturer of vehicle safety devices, including airbags, which accounted for 51% of its revenue in the third quarter, but antitrust concerns about joining these two industry leaders might doom its bid. Flex-N-Gate, as a manufacturer of car bumpers and headlights, is an airbag industry outsider, but safety and reliability are likely paramount at this point and a company with no track record might not be well received.

China's Key Safety Systems is the world's fourth largest airbag maker, and it would become the second biggest behind Autoliv if it acquired Takata. It has partnered with PE firm Carlyle Group to bid on the airbag maker and it is also expanding production globally, with a goal of producing 100 million airbag inflators by 2020.

It would seemingly be a lead bidder, but Daicel and Bain have also reportedly made the largest offer for Takata with a $2.9 billion billion bid. Takata's lawyers and advisors are also said to be leaning in their direction. It's the bankruptcy demand that causes the most consternation.

Automakers like GM, Ford, and Honda want to be reimbursed for the costs of the recall, which totals around $10 billion. There might also be legal costs from lawsuits arising from the deaths and injuries the faulty airbags caused, which Takata would largely be protected from paying if it declared bankruptcy and explains the preference for Daicel's bid. The next deep pockets would be the car companies.

Still, Daicel might not be completely free and clear even if it wins. General Motors own bankruptcy protections were diminished by the courts ruling its role in the faulty ignition switch debacle meant the "new GM" buyer was liable for claims against the bankrupt "old GM." A bankruptcy filing may also substantially disrupt the supply chain.

While the situations between Takata and GM are not completely analogous, it does indicate that whichever bidder does win, it may still find substantial costs attached. This catastrophe is already a huge, expensive wreck, and it can still cause a chain-reaction collision throughout the industry. In fact, it may be unavoidable no matter which route is taken.