Regardless of whether or not you agree with Warren Buffett and George Soros' supporting Hillary Clinton's failed bid for the Presidency, these legends remain two of the savviest investors of our time, and that makes tracking the stocks they're buying smart. In the third quarter, Buffett and Soros may have been lobbying for a Clinton win, but they still bought shares in airline and energy stocks, and those bets could pay off big under President-elect Trump.

The airline industry's cyclical booms and busts have kept many seasoned investors, including Buffett, on the sidelines -- until now.

Despite Buffett's calling the industry a "death trap" in 2013, his Berkshire Hathaway (NYSE: BRK-B) (NYSE: BRK-A) bet big on airlines in the third quarter, acquiring over a billion dollars' worth of stock in American Airlines (NASDAQ:AAL), Delta (NYSE:DAL), United Continental Holdings (NASDAQ:UAL), and Southwest Airlines (NYSE:LUV).

Berkshire's airline positions represent a small proportion of its $131 billion equity portfolio, which suggests that these airlines were bought by Berkshire Hathaway portfolio managers Ted Weschler and Todd Combs, not Buffett himself. Nevertheless, it might not be tough convincing the Oracle of Omaha that owning these airline stocks makes sense right now.

Over the past decade, airlines have merged to gain margin-friendly leverage, cut back on flights to boost the number of people on each plane, held the line on ticket prices, embraced a la carte pricing for things like luggage, and bought fuel-efficient aircraft. All of those moves are increasing margins and thus, dropping big money to airline operators' bottom lines. 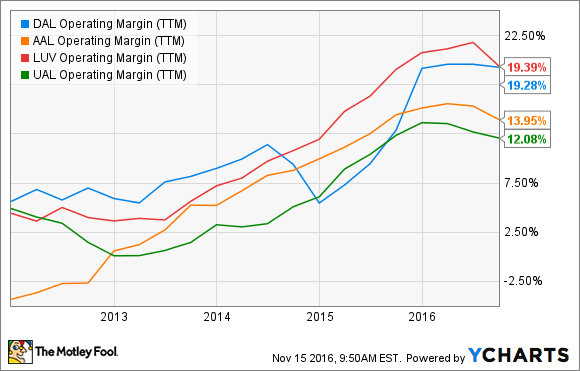 Surging industry profitability, however, may only be one reason that aerospace stocks are intriguing to Buffett and his team. The industry's price-to-earnings ratios are a relative bargain compared to the broader market. For example, American Airlines' shares are trading at trailing and forward P/Es of just 4.6 and 10.2, respectively, and that's significantly lower than the S&P 500's trailing P/E of 25.

Importantly, those valuations could become even more appealing if Trump's plans to boost infrastructure and investment in domestic energy production results in lower jet fuel prices. On the campaign trail, Trump vowed to improve airports, build capacity, and open federal lands to oil and gas exploration. Since increasing oil and gas production could help keep jet fuel prices low, and jet fuel is a major airline expense, Trump's policies could be a boon to airline operators. To put the potential tailwind in context, the International Air Transport Association reports that global jet fuel prices are currently 5.5% lower than they were a year ago, and that translates into $21 billion in industrywide savings this year.

Williams Companies was Soros' biggest new buy last quarter, with over 3.1 million shares. While his history of rapidly moving in and out of stocks means that there's no telling how long he plans on owning those shares, the stock might be worth keeping on your radar. If Trump removes regulatory hurdles standing in the way of pipeline projects, and tapping energy reserves on federal lands leads to higher domestic gas production, then Williams Companies' transport volumes could climb meaningfully.

Soros also bought smaller stakes in the oil and gas producers California Resources and Rice Energy, two domestic oil and gas producers that could benefit from deregulation and any increase in energy demand stemming from Trump's economic stimulus plan. California Resources holds interests in roughly 2.4 million net acres with net proved reserves of 644 million barrels of oil equivalent. Meanwhile, Rice Energy is heavily exposed to oil and gas in the Appalachian basin, with approximately 92,000 net acres in the southwestern core of the Marcellus shale, about 56,000 net acres in the southeastern core of the Utica shale, and operations in the Upper Devonian shale.

Investors shouldn't follow these gurus blindly, because there's no guarantee that these buys will pan out. Nevertheless, Buffett and Soros' track records are enviable. That suggests investors might want to spend some time evaluating whether or not these companies are right for their portfolios.