International Business Machines (NYSE:IBM) hasn't yet returned to growth. The company has reported year-over-year revenue declines for 18 quarters in a row, and it's unclear exactly when that trend will reverse. But there is a very important component of IBM that has finally turned the corner. After nearly two years of weak sales, IBM's software business is growing again.

Software is also extremely profitable for IBM, with operating margins in excess of 30%. This high level of profitability made the declines of the past couple of years all the more concerning. The good news for investors is that this wildly profitable business is growing again. 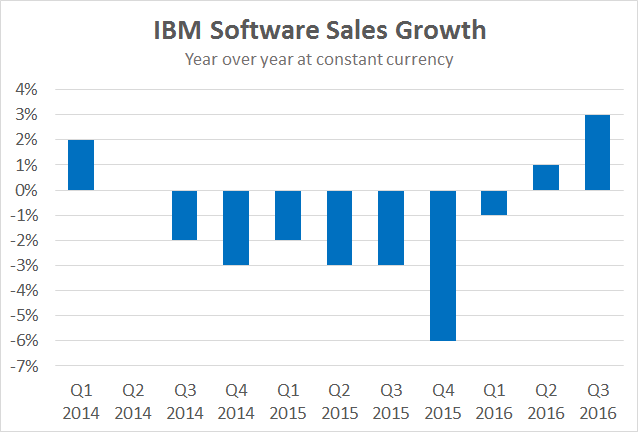 Annuity software sales, which includes software-as-a-service as well as any other software that provides recurring revenue, has finally started to pick up the slack. Annuity software sales jumped 7% during the second quarter and grew by a mid-single-digit percentage during the third quarter, an acceleration compared to flattish growth over the past two years. IBM expects this growth to continue during the fourth quarter.

A return to software sales growth shouldn't be too surprising given the continuing growth of IBM's strategic imperatives. These growth businesses, which include areas like cloud computing and analytics, now account for 40% of IBM's revenue. Collectively, these businesses grew by 15% year over year during the third quarter.

IBM doesn't break out how much of this software sales growth has been organic, and how much can be attributed to acquisitions. But, given the number of software companies IBM has bought in recent years, acquisitions are likely a major driver.

One thing working against IBM has been its shift toward software-as-a-service. While revenue from transactional software is generally realized up front, revenue from subscription software is realized over the lifetime of the deal. This tends to push software revenue into the future, which can hurt sales in the present. The growth in annuity software sales during the most recent quarter was driven primarily by SaaS sales.

One thing that's important to remember is that IBM's various businesses don't exist in a vacuum. Cloud-delivered-as-a-service, which includes SaaS as well as platform-as-a-service and infrastructure-as-a-service, has reached a $7.5 billion annual run rate for IBM, growing by 65% year over year during the third quarter. The exact makeup of this revenue isn't disclosed, but with a wide variety of IBM software, like Watson, available as-a-service on the company's cloud platform, cloud growth is helping to drive software growth.

IBM still has a lot of work left to do. The company will need to return to revenue and earnings growth sooner rather than later for the market to give it credit for its ongoing transformation. But a return to growth in the software business is a positive sign, one that suggests that the turnaround effort is beginning to take hold.