Winter movie season is just beginning, and AMC Entertainment (NYSE:AMC) has solidified itself this year as an international leader in the movie theater industry. But even long lines for all the year's holiday blockbusters may not justify a purchase of AMC's stock. Here is what investors should consider right now.

AMC has had a busy year

AMC Entertainment bought out small theater operator Starplex during the summer of 2015 to increase its footprint in non-urban markets. The company more than outdid itself in 2016, moving to purchase two other companies: small-town theater chain Carmike Cinemas and Europe-based Odeon & UCI. Carmike shareholders are set to vote on the deal on Nov. 15. AMC expects the Odeon & UCI deal to close by year's end.

The deals will cost AMC about $1.2 billion each. That $2.4 billion will buy AMC the claim to being not only America's largest theater chain but also the largest in the world. AMC owned or operated 386 theaters with 5,244 screens as of the end of June. At the time the deals were announced, Carmike had 276 theaters with 2,954 screens and Odeon & UCI had 242 theaters and 2,236 screens.

The big-spending company has also been in a race with other U.S.-based chains to rekindle interest in going to the movies. Ticket sales have been in decline since the early 2000s, but AMC has been able to drive revenue higher by increasing ticket prices.

To justify the hikes, AMC has been investing in premium screen and audio experiences with things like 3D movies and IMAX high-definition screens. Also in the works have been efforts to install recliner seating and roll out premium food and drink menus. As a result, the company has been able to set best-ever revenue figures, in spite of falling ticket sales.

Hollywood hopes to do its part as well. Box office revenue set new records in 2015 on the back of Star Wars: The Force Awakens and Jurassic World. While 2016 is not expected to match last year's success, a new Marvel Comics movie, Doctor Strange; a Harry Potter sequel; and another Star Wars film are expected to draw big crowds as the year comes to a close.

A large theater chain with a large price tag

It may be tempting to buy AMC on excitement over the company's moves, as well as two back-to-back years of strong box office sales. With rising revenue and profits in addition to the two buyout announcements, AMC stock has been having a great 2016. 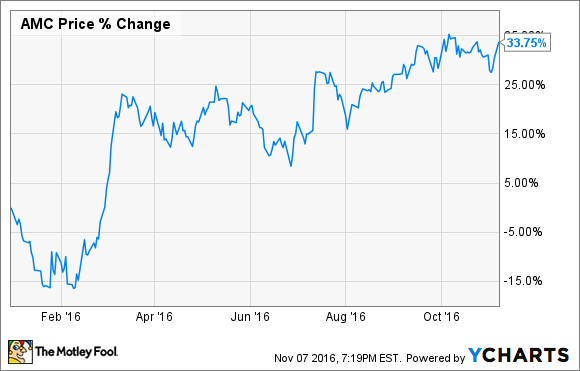 However, much of the excitement is already priced in at current valuations. The trailing-12-month price-to-earnings ratio is over 29, and the one-year-forward picture based on projections only improves the figure to a 23 time P/E.

Investors have high hopes: AMC reported 13% higher revenue and 158% higher earnings per share in the third quarter. Through the first nine months of 2016, revenue was 5% higher and earnings per share 33% higher than last year. Despite the knockout success the company has had so far, shares initially fell on the news as investors and analysts were looking for even higher revenue figures.

AMC is flying high, but so are expectations. Even with the company growing the top and bottom lines through enhancing the moviegoing experience and presenting a strong lineup of movie releases, this year's big run-up in share prices makes for an expensive purchase. And with higher-than-anticipated expenses expected to start rolling in during the fourth quarter as the company completes the Carmike and Odeon purchases, I think the stock has some room to go on sale before my interest is piqued.