Cheniere Energy's (NYSEMKT:LNG) earnings results this past quarter were what investors had been waiting for. Now that part of its facility is online and fully operational, revenue is rising rapidly and helping to offset the costs that the company has incurred spending several years building these two facilities. For investors in Cheniere and its subsidiary, Cheniere Energy Partners (NYSEMKT:CQP), the next question is where the company goes from here. Now that the company is talking to its investors on a regular basis, investors are starting to get an idea of what that future might look like. Here are several quotes from the company's most recent conference call that show what management has planned in the coming years.

The opportunity for LNG is still growing

One thing that CEO Jack Fusco started off the call mentioning is that liquefied natural gas, or LNG, isn't a passing fad in the energy market. With LNG becoming more cost effective as companies figure out how to make facilities less expensive and shale gas opening up massive amounts of cheap reserves, the growth of the industry over the next 20 years is going to be staggering.

At a recent conference of global LNG players, international consulting firm, McKinsey, forecasted an over-20% growth in primary energy demand between 2013 and 2035, with the power and industry sectors, those where LNG can play a significant role, expected to account for nearly 75% of the total growth. Over a similar period of time, LNG demand growth is expected to far outpace competing fuels such as gas, oil and coal.

Perhaps this is painting LNG in an overly optimistic way, but even if the reality is half of these estimates, it still presents plenty of opportunity for Cheniere to expand its LNG export business beyond its existing facilities.

The shift to gas is starting to stick

There has been a pretty clear pattern over the past few years of natural gas displacing coal in the electricity generation market. The one thing that may give investors pause about this trend, is that it's possible those same power plants could shift right back to coal when the price is right. According to Chief Commercial Officer Anatol Feygin, though, there are signs in some major LNG markets that this may not be the case.

As we highlighted last quarter, we believe there is a secular shift to cleaner-burning natural gas and power generation, and in places like the United Kingdom, the combination of a carbon price floor and an almost doubling of coal prices has driven coal almost entirely out of the merit order to natural gas' advantage.

For two days in May this year, the U.K. did not use coal in power generation for the first time since the Industrial Revolution. Current coal use is lowest in the U.K. since at least 1860. We've seen initial signs that the same theme will play out in Continental Europe, with gas demand continued to grow in places like Germany and France. In the third quarter, German and French combined gas demand in the power sector more than doubled [year over year]. Importantly, we believe this fuel-switching is sticky, and once shut down, older coal plants are unlikely to return to service.

Zigging while the market zags

While many investors may be new to the LNG market, companies have been making major investment decisions around this market for close to 20 years. A pretty clear pattern has emerged on when new LNG facilities are approved and brought to market, as Cheniere management describes in this chart: 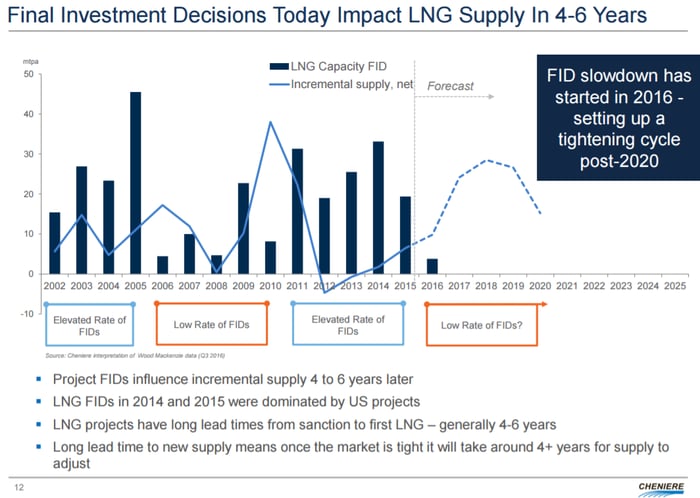 Noting a clear opportunity, Feygin described how Cheniere intends to exploit this pattern.

Based on historical cyclicality of the LNG market over the past dozen-or-so years, the slowdown in the number of final investment decisions on new liquefaction capacity has been followed by a tightening of supply. We have started to see a pullback in the number of LNG trains being sanctioned over the past two years, with only one expansion train officially moving forward so far in 2016.

This is clearly setting up a scenario where the LNG market will tighten dramatically by the end of the decade. If customers need supply for early next decade, given the lead time, even for our fully permitted brownfield expansion trains, a final investment decision on new liquefaction capacity would need to come in 2017. With two fully permitted brownfield expansion trains as well as mid-scale modular solutions, that we'll discuss in a minute, under evaluation and the experience to efficiently manage U.S. gas supply needs, Cheniere has the speed and competitiveness to be the next LNG to market.

If there were any questions as to whether Cheniere might not make a final investment decision on the expansion of its Sabine Pass and Corpus Christi facilities, this statement seems to put that concern to rest.

As management mentioned, LNG is becoming a bigger and bigger component of the energy mix. To meet that need, the company will also need some smaller scale operations. Cheniere hopes to capture a decent chunk of this market thanks to a recent joint venture project, which, according to Feygin, could reap some rewards in less than a year.

We're evaluating the merits of building smaller modular liquefaction trains and have awarded a FEED contract to a consortium comprised of KBR, Siemens and Chart [Industries]. The FEED process will help us to assess the cost benefits, if any, of building liquefaction trains using a modular and more standardized approach to drive capital cost lower through off-site, controlled-environment manufacturer of significant components. We expect to be in a position to share more information on this modular liquefaction initiative with you sometime in the middle of 2017.

Cheniere Energy barely resembles the company it was a few years ago. It has finally brought its product to market, and management is showing a path forward that should lead to considerable shareholder value growth over the long term. There are still a few hurdles to overcome with its two LNG facilities, but the future for Cheniere Energy certainly looks pretty good.