It'd be easy to think that bank stocks are getting overheated given how much they've soared since the results of the presidential election were announced last week. However, investors needn't be concerned that bank stocks are approaching, or even getting near, bubble territory.

The view that bank stocks may be in or near a bubble can be summed up in one chart. It compares the performance of the KBW Bank Index, which tracks two dozen of the nation's biggest publicly traded banks, to the S&P 500: 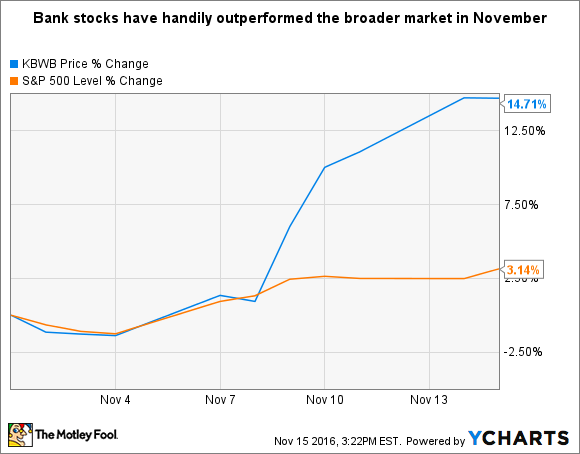 Bank stocks are climbing on the back of President-elect Donald Trump's promise to revitalize the economy and reduce regulation in the financial industry. A stronger economy should boost loan demand, spur inflation, and presumably incentivize the Federal Reserve to raise interest rates.

The latter in particular is enough on its own to move bank stocks. To this end, if interest rates were to increase by a mere 100 basis points, JPMorgan Chase (NYSE:JPM), Bank of America (NYSE:BAC), Citigroup (NYSE:C), and essentially every other bank would stand to earn a lot more money.

Rolling back regulations would catalyze these gains, with two rumored moves having a particularly potent impact. Getting rid of the Volcker Rule, which prohibits depository banks from trading like hedge funds, would spur earnings at all three of these banks. And reducing the amount of high quality, low-yielding liquid assets that a bank must hold would allow these companies to underwrite more high-yielding loans.

But just because these changes have translated into higher bank stock prices doesn't mean that banks are anywhere near bubble territory. This is easy to deduce by looking at bank valuations, as a bubble implies irrationally inflated stock prices.

Until bank stocks trade for more than two times book value, which is more than twice Wells Fargo's current premium, there's simply no reason to be even remotely concerned about irrationally inflated values. In short, bank stocks still seem to be reasonably priced.