2016 has been a solid year for the stock market, which has resisted some events that many would have expected to send stocks lower. Nevertheless, 2016's year-to-date gains of 8% or so for the broad S&P 500 aren't exactly lighting up the performance charts, leaving some investors feeling uninspired by the market. However, some stocks have produced much better returns, having doubled so far in 2016. Below, we'll take a closer look at Vale (NYSE:VALE), MasTec (NYSE:MTZ), and Oneok (NYSE:OKE) to see why they rose and whether there's any upside left for new investors in these stocks. 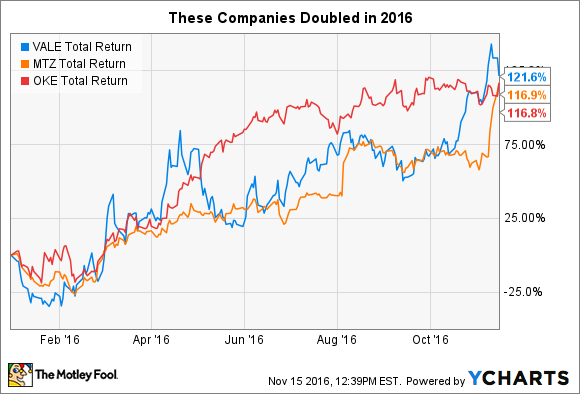 Brazilian mining giant Vale has been a big victim of the poor performance of commodity markets lately. In particular, as one of the biggest iron ore producers in the world, Vale has struggled as demand for the raw material for steel production has fallen, following the lack of construction and infrastructure activity throughout much of the global economy.

Yet times started to turn for Vale earlier this year, when iron ore prices finally hit bottom and started to recover. In addition, what could have been a catastrophic financial hit due to the breach of a containment dam turned out to be not nearly as bad as many investors had feared. That's what drove most of Vale's strong performance early in the year.

More recently, better prospects for the steel industry globally have also helped push Vale higher. If the optimistic opinion that some investors have for steel's rebound pan out, then Vale could have further gains ahead of it.

Another loser from the commodities bust was MasTec, which offers infrastructure construction services with an emphasis toward helping oil and natural gas companies with projects tailored to the industry's unique needs. Many feared that when energy companies felt the pain of plunging crude oil prices and weak conditions in the natural gas market, they would have to cut spending and hurt MasTec's future prospects as well.

However, even with poor conditions in energy, MasTec has still been able to get more business through its doors. In its most recent quarter, the company managed to boost its revenue by 43%, and adjusted net income more than tripled from the prior year's third-quarter results. In particular, sales to energy customers soared by four-fifths, and adjusted pre-tax operating earnings from the oil and gas business more than doubled. That was just the latest in MasTec's defiant approach toward serving the industry, and looking ahead, many think that the company has more than enough positive momentum to keep climbing in the future.

Another energy-industry player that has done well is Oneok. The midstream general partner of the Oneok Partners master limited partnership took it on the chin last year, as investors punished just about every company with any connection to oil and gas. However, higher volumes flowing through Oneok Partners' pipelines generated higher fee income that boosted the share that Oneok receives as general partner, and investors are hopeful that future projects will continue to generate further upside potential both for Oneok and its MLP.

Looking ahead, Oneok has high hopes for the future. Healthier cash flow will help the company and its MLP potentially reduce its leverage. As financial conditions improve, Oneok will be in a position to take advantage of opportunities that arise within the industry, buying assets from competitors in a weaker financial position and getting good deals to produce future profits. In addition, if energy prices recover, then higher production among pipeline customers should only serve to heighten future growth.

It's rare to see stocks double in a single year, and you can't count on lightning striking twice with strong performance from those stocks in the future. For Vale, MasTec, and Oneok, however, the conditions that contributed to their success show few signs of letting up. If things keep improving in their businesses, then the stocks could keep rising from here.