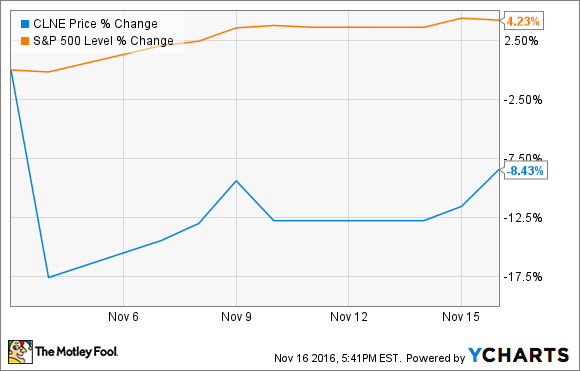 The company reported its first quarterly net loss since last year after breaking through with profits in each of the first two quarters of 2016. At the same time, there was -- on the surface, at least -- some weakness in the company's fuel-volume metrics, as it reported declines in both liquefied and renewable natural gas in its financial statement.

While the market reacted to the surface-level numbers, it may have ignored some key improvements in the company's operating and financial results and one thing that bodes well for future growth. Let's take a closer look.

Gallons delivered is a key metric for measuring Clean Energy Fuels' performance and progress, since every part of the business is built to grow the amount of natural gas it sells to vehicle operators. Clean Energy reports fuel-volume sales as follows:

The table above shows that Clean Energy consistently grew its fuel volumes at double-digit rates in recent years, but that growth has slowed more recently, with the company delivering about 5% total fuel-volume growth. Furthermore, there are two concerning (on the surface) numbers above that are going backwards: RNG, or renewable natural gas, and LNG, or liquefied natural gas. (CNG is compressed natural gas.) RNG and LNG show either zero growth or even declines, more recently. This is why it's important to understand what's included in the numbers above, as well as how Clean Energy has slightly changed its business in recent years, and how that's affected the numbers above.

To start, let's talk about RNG. The line item above does not include "Redeem," the company's brand name for renewable natural gas that it sells to transportation customers, which is included in the CNG and LNG line items. So what's in the RNG line? Sales to utility customers, a business that Clean Energy has largely exited after selling its stake in the McCommas Bluff biomethane production facility in 2015.

Next is LNG. The vast majority of this volume is sold to transportation customers on a recurring basis, but the company also sells one-off bulk volumes to non-transportation users. In the third quarter of 2015, the company sold 1 million gallons to Pacific Gas & Electric in a one-time order.

In other words, the declines in RNG and LNG aren't necessarily specific to a decline in demand from transportation customers. If we remove RNG -- which is now essentially a legacy number from a business it has mostly exited -- from the equation, and adjust for the non-recurring bulk LNG order, we have fuel sales to primarily transportation users, which grew about 7%. This is not a significantly higher rate, but a more accurate measure of fuel-volume growth to transportation customers. It's also indicative that, even as oil prices stay low and keep diesel cheap, there continues to be interest in natural gas.

While fuel volumes measure current growth, new station construction is a leading indicator of future demand. Clean Energy Fuels is an established expert in the station-construction business, having the technical expertise and broad reach to build stations across the country. And as the largest operator of natural gas refueling stations in North America and a manufacturer of station-refueling equipment, the company is uniquely positioned to be a first-choice long-term partner for vehicle fleet operators.

For this reason, Clean Energy Fuels will complete 63 station-construction projects in 2016, only slightly below the 67 projects from 2015. There's a key difference, however, in that much of 2015's construction work was upgrades, while this year, a larger number has been full station construction.

Through the first nine months of 2016, the company has generated $48 million in revenue from construction projects, up 75% year over year. Furthermore, management says that its backlog for new station projects for 2017 is shaping up to be similar to 2016. That bodes well for continued growth in fuel volumes.

Expenses have fallen, and it's probably sustainable

Near the end of 2014, Clean Energy management started making expense reduction a priority in its refueling operations, compression equipment manufacturing business, and in corporate costs, while paying down a significant portion of its long-term debt over the past 12 months. Through the first nine months of 2016, the company has spent nearly $17 million less on selling, general, and administrative expense (SG&A) and interest expense, while generating $41 million more in gross margin dollars. This was due, in part, to improved efficiencies in its station construction and compression equipment-manufacturing segments. The company has also spent nearly $17 million less on capital expenditures.

Looking ahead, these figures may be more sustainable than it would seem. On the earnings call, CFO Bob Vreeland said that management "doesn't expect significant changes in our current SG&A run rate." And when it comes to interest expense, this amount is actually going to fall even further. As of this writing, the company has paid down $234 million in long-term debt, reducing its total debt -- and the associated interest expense going forward -- by more than 40%.

Lastly, there's capital expenditures (capex). At some point in the future, the company will need to increase capital spending on stations it will own and operate. But co-founder and CEO Andrew Littlefair has been adamant that it won't build new stations on speculation of demand going forward, but only on identified need from its customers. Furthermore, the stations that were paid for with nearly $400 million in capex over the past five years will support a significantly higher fuel volume than they are currently delivering.

Looking beyond the top and bottom line

Clean Energy Fuels may deliver another GAAP loss this year, but at this stage of its growth, operating cash flows may be a more important measure of health. And operating cash flow has shifted from a negative result in 2015 to $43 million to the positive so far this year on a steady diet of continued growth in volumes, leaner operations, and lower debt expense.

With another strong year of station projects already lined up for 2017 and cash expenses set to fall even further, Clean Energy Fuels is probably in much better shape than Mister Market seems to realize.