Fiat Chrysler Automobiles (NYSE:FCAU) took the wraps off of its all-new 2017 Jeep Compass in Los Angeles on Thursday. The Compass is a global product, set to represent Jeep in the white-hot compact SUV segment all over the world.

That makes it a big deal for FCA. Let's take a closer look.

About the all-new 2017 Jeep Compass

The new Compass looks a lot like a smaller version of Jeep's Grand Cherokee. That's not a bad thing, and it's not an accident: The Grand Cherokee is a hugely successful product, and the Compass aims to bring some of that Jeep magic to the compact SUV segment -- a market niche in which Jeep has struggled somewhat.

On paper at least, the new Compass looks like a worthy contender, with a well-equipped high-tech interior, significantly uprated off-road chops, and a substantial options list. Like other Jeeps, buyers can use the options list to create a Compass optimized for on-road daily driving, for serious off-road use, or several points in between.

The Compass will be offered in the U.S. with just one engine, FCA's 2.4-liter Tigershark four-cylinder making 180 horsepower and 175 pound-feet of torque. Front-wheel drive (4x2) and all-wheel drive (4x4) configurations will be available. Both configurations will be offered with a six-speed manual transmission. Buyers choosing  4x2 versions will have the option of a six-speed automatic transmission, while 4x4s will be available with FCA's nine-speed automatic gearbox.

For the serious off-roaders, the Compass will be available in a Trailhawk version that will probably make it the most capable compact SUV on rough terrain. Trailhawks come with unique fascias and a slightly lifted suspension that will yield a 30-degree approach angle, a 24-degree break over angle, and a 34-degree departure angle. Trailhawk models also get Jeep's Hill Descent Control and a Rock Mode added to its Selec-Terrain system.

FCA hopes that customers will find the Compass comfortable on-road, too. That long options list carries over to the interior, where three different touchscreen systems and two different dash clusters are available, along with upgrades including leather seats and other luxury-like features.

FCA says that the Compass will get "up to" 30 miles per gallon, but it hasn't yet released official fuel-economy numbers. It also hasn't told us when the Compass will go on sale or how much it will cost. The current Compass starts at $19,795; a loaded version runs about $27,000.

For  for the U.S. market, the Compass will be built in Mexico.

Why the 2017 Jeep Compass is (very, very) important to FCA

It's hard to overstate the new Compass's importance to Jeep and FCA. The market for SUVs is booming around the world and Jeep is an iconic SUV brand, but its current compact SUVs haven't really lived up to their potential.

The new Compass will replace both the current Compass and the Jeep Patriot. Both were originally introduced way back in 2007 as two sides of the Jeep coin: The Patriot with traditional boxy Jeep styling and traditional Jeep off-road abilities, and the Compass with softer styling and softer handling, aimed more at commuting and kid-hauling duty.

It wasn't a great strategy, and it hasn't yielded great results. The Compass and Patriot compete with huge-selling stalwarts like Honda's (NYSE:HMC) CR-V and Ford's (NYSE:F) Escape, and the Jeeps just haven't kept up. Despite several updates in the years since, the combined total U.S. sales of the two lags far behind the four category leaders, despite strong gains for the outgoing Compass in 2016. 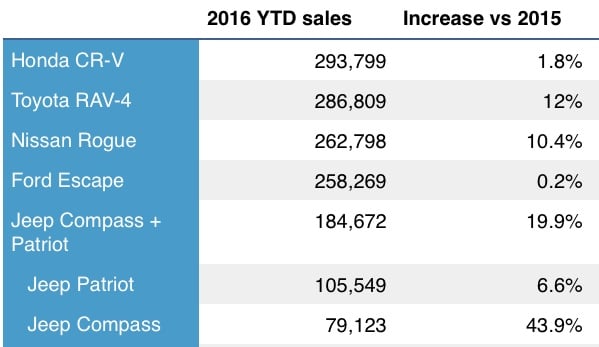 Contrast with the one-size-down subcompact SUV segment, where the (much newer) Jeep Renegade is the clear leader.

The strength of the Jeep brand name gives the Compass the potential to take a leading position in the much larger-volume compact SUV segment -- if the product delivers on its promise (and if FCA can manufacture enough of them, which may turn out to be the limiting factor).

This isn't just about the U.S. -- it's a global opportunity

Unlike the current Compass and Patriot, the all-new Compass is a global product, rolling out in China, South America, and Europe as well as North America. As in the U.S., demand for compact SUVs is booming in all of those markets. That means the new Compass has a tremendous opportunity to give Jeep's global sales a substantial boost.

Jeep brand CEO Mike Manley thinks the Compass will get it done. In remarks reported by the Detroit News, Manley said he expects the Compass to be Jeep's top seller globally by 2018. That title currently belongs to the midsize Cherokee, with about 293,000 sold around the world this year through October.

The upshot: A lot is riding on the all-new Jeep Compass

FCA CEO Sergio Marchionne has an ambitious plan to reduce FCA's huge debt load and make the company a sustainable global contender. A lot of that plan rides on Jeep: The iconic SUV brand is tasked with delivering much of the profits that will fund the rest of Marchionne's vision. Profits have been good lately, but a lot depends on the Compass.

The good news is that the 2017 Compass looks to have what it needs to succeed. But we won't know for sure until reviewers have the chance to drive it. Stay tuned.