It's true that the next administration won't be as friendly to solar energy, but at this point, it may not matter. The progress made in solar energy over the past six years shows that solar energy is rapidly becoming competitive and will be good for jobs, energy security, and businesses. Here's a look at how far the industry has come.

In 2011, President Obama launched a program called SunShot aimed at making the cost of solar energy competitive with that of fossil fuels by 2020. Five years later, the solar industry has reached most of its 2020 goals, and the program is back with even more ambitious goals for 2030.

Below is a chart SunShot just posted that shows where solar energy costs without subsidies stand today, along with 2010 costs and targets for 2020 and 2030. 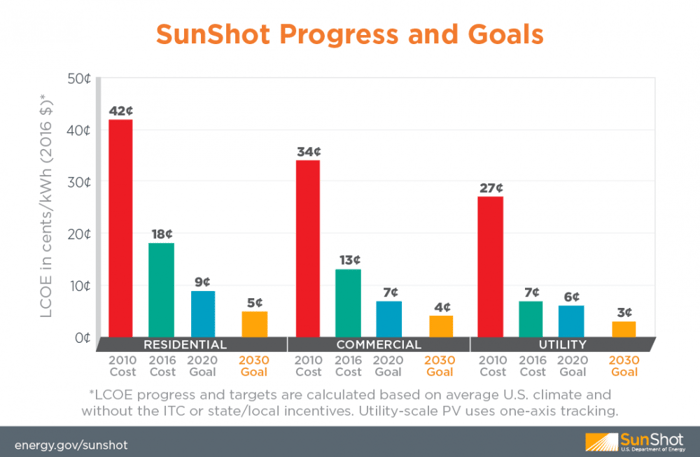 Solar energy is already competitive with fossil fuels in some locations today, and the 2020 goals, which are close to being hit, will make solar even more attractive. For example, the average residential consumer in the U.S. pays 13 cents per kWh, so the 2020 goal would make solar viable for most homeowners. In states like California (19 cents), New York (18 cents), New Jersey (16 cents), and Massachusetts (18 cents), the cost of electricity is so high that solar energy will be a no brainer if 2020 goals are reached.

On a utility basis, wholesale spot prices for electricity are currently ranging from 2 cents to 3.5 cents per kWh. And much of the electricity being bid into those markets is from plants that are decades old. Solar energy is already lower cost than new fossil fuel generation in some states today, and could compete with wholesale prices by 2030.

As First Solar, SunPower, and Canadian Solar plan out their project development businesses for the next few years it's this cost advantage they'll be hammering home to utilities and regulators. And after winning competitive bids in Mexico against fossil fuel SunPower and Canadian Solar have shown they can win on economics in solar energy.

Solar energy is low risk for consumers and utilities

The cost reduction trends gives solar energy avenues for growth in two wildly different markets, which gives companies and investors optionality. On the residential side, solar energy is economical for more and more homeowners as costs come down. And changing utility rules may even make it economical to own a battery storage system along with solar panels. This will help SunPower and SolarEdge grow in states where policies aren't hostile to solar energy.

On the utility side, where Canadian Solar and First Solar have most of their exposure in the U.S., falling costs are making solar energy an easy choice for utilities and corporate customers. Long-term contracts to buy solar energy come with lower risk than volatile fossil fuels from both a price and regulatory standpoint. That's a value to utilities, regulators, and corporations that are now buying renewable energy directly.

At the pace cost reductions are taking place, there's no stopping solar energy. It's already competitive with fossil fuels today, and by 2030 it'll be the low cost energy source for most of the country. What investors need to see next is developers like First Solar, SunPower, and Canadian Solar winning bids to sell energy to utilities around the country, turning the promise of low cost solar into profitability. And on that front there's still work to be done.