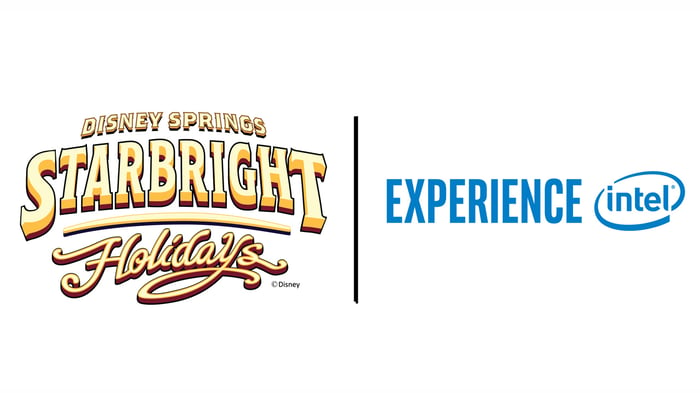 The next generation of nighttime entertainment kicks off at Disney's (NYSE:DIS) Florida resort tonight. The theme-park giant is teaming up with Intel (NASDAQ:INTC), sending a fleet of 300 illuminated drones up in the air for a nightly spectacle at its Disney Springs shopping and entertainment complex.

Disney received clearance from the Federal Aviation Administration to use drones for entertainment purposes earlier this month, and after a few test runs in recent days we've arrived at tonight's debut of "Starbright Holidays -- An Intel Collaboration." The show features the drones with multi-colored lights forming swirling versions of Christmas trees, doves, and other pieces of illuminated art, synchronized to a soundtrack of classic holiday songs. The shows will run at 7 p.m. and 8:30 p.m. nightly through Jan. 8.

The show will take place over the lake that wraps along the perimeter of Disney Springs, offering decent viewing angles through most of the property. Keeping the drones over the lake also helps with safety concerns, as drones that fail during a performance would simply fall into the water. The drones are all backed with sensors so they don't collide with one another.

It's the season of giving

Intel and Disney have a win-win relationship here. Intel gets to show off its Shooting Star drones, and while this is solely an entertainment application the real goal for Intel is synchronized drones in commercial operations that can help speed up everything from security operations to infrastructure inspections.

Disney, in return, gets a high-tech spectacle that requires little in terms of human labor in this collaboration. Just one person can control the operation of the 300 drones. It also goes without saying that having a marquee attraction that will draw thousands, if not tens of thousands, of tourists and locals to Disney Springs will pay off in an even bigger way.

Disney recently updated what used to be called Downtown Disney, adding several new high-end restaurants and stores to what was renamed Disney Springs earlier this year. This nightly holiday show will be successful, and it's safe to say that it will morph into a non-holiday drone show come January.

The world's largest theme-park operator was struggling with Disney World attendance issues earlier this year, but it's fair to say that Disney Springs is drawing better now than Downtown Disney was in the past. Now that Disney's theme-park attendance turned around in Florida during the summer quarter and on-site hotel bookings are starting to pick up it sets the stage for a strong showing at Disney World in general and Disney Springs in particular during the peak holiday shopping season when it matters the most. Disney's drone show takes flight tonight, and if the media giant's aim is true, it will be the only thing that's still up in the air.