Like it or not, utility companies have been a central topic of this election season, even if they weren't often named directly. Hillary Clinton wanted to install solar panels on rooftops, a direct threat to the utility business model, and Donald Trump wants to make coal great again.

Now that Donald Trump has won and will become president early next year, what can utilities expect?

The first thing political candidates often point to as a hurdle for energy companies is environmental regulations. And coal is often seen as the energy source taking the brunt of those regulations.

It's true that coal has been hurt by regulations on things like sulfur, mercury, and carbon dioxide, and a Trump Administration may reduce those regulations. But that may not necessarily create a wholesale change in the utility industry.

Costs are what truly drive utility and regulator decisions, and the fact of the matter is, new coal plants aren't competitive with natural gas, wind, or solar in most locations. And many coal plants that are decades old are in need of hundreds of millions of dollars in upgrades, which is why they're being shut down by the hundreds.

Two utilities I'll be watching for changes in strategy are Southern Company (NYSE:SO) and Duke Energy (NYSE:DUK), who own power plants with a variety of fuel sources. If they see lower costs and longer life from coal plants in particular, that could be an incremental positive for their results in the next few years.

I think the best outcome utilities can hope for is reduced operating costs and maybe a slightly longer life of aging power plants as a result of fewer regulations. That could boost profitability slightly, particularly for companies with heavy coal exposure.

One of the strange reactions to the Trump election has been a broad rise in commodity prices. The market's theory is that a combination of stimulus spending and protective tariffs will help U.S. commodity producers.

If prices for commodities like coal and natural gas do rise, though, it could actually put pressure on wholesale utilities that sell electricity into the competitive market. And most wholesalers have struggled with difficult operating conditions for years now.

Low input costs were one of the tailwinds wholesale power producers have had, and that could potentially disappear if commodities rise.

When you look at a shift from coal to natural gas and renewable energy over the past decade, it's driven primarily by economics, but the environmental and regulatory pressures have helped as well. The Trump Administration could reduce environmental and regulatory pressure, but economics are still a driving factor. And decisions made on building power plants in the next four years have to pay off for decades to come. Regulations that fall away under Trump could very well be put back in place under the next administration, whoever that may be.

As independent power producers like NRG Energy (NYSE:NRG), Dynegy (NYSE: DYN), and Calpine (NYSE: CPN) make decisions on what assets to build and buy over the next four years, they'll have to consider how a future change in political winds will change their profitability. You can see below that low-cost natural gas and slow growth in electricity demand have led to huge losses for these three companies over the past five years, and those trends won't change overnight. 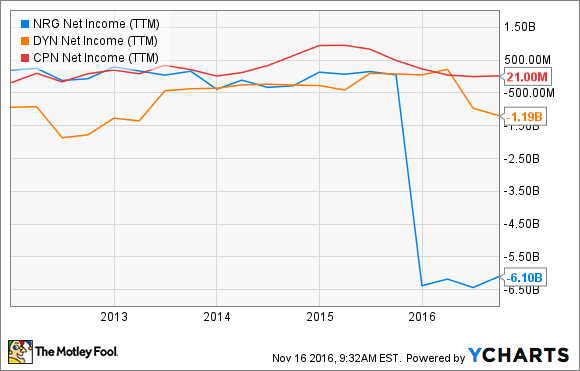 The reality that regulations could change in the future will reduce the desire to build a rush of coal plants, despite Trump's wishes. Watch to see if there are more natural gas and renewable investments made at independent power producers under Donald Trump, which will tell a lot about where the energy market is heading.

How to invest in utility stocks under President-elect Trump

As investors look at utilities heading into 2017, I think it's important to look at who will be able to generate short-term benefits from the policy changes that may take place under a Trump Administration, and also make the long-term adjustments to their businesses that will make them successful for decades to come. Trump can't stop the cost of wind and solar from falling, making them more competitive economically, which is why I see Southern Company, Duke Energy, and NRG Energy continuing to invest in these new sources of energy. But he can reduce regulations that will lead to lower costs and higher profits for NRG, Dynegy, and Calpine in the short term.

Utilities need to last through multiple administrations and many political cycles, so don't react too swiftly one way or another to utility stocks just because Donald Trump will be president. Companies need to set themselves up for the future, and that will be more important than any short-term benefit any new president may give.