Indian automaker Tata Motors (NYSE:TTM) has had a trifecta of bad news in the past month and has shed more than 15% of its value in that time. Here's what has been happening that led to the downward trend as of late.

1. The Tata Group fires its chairman

In a surprise move last month, the Tata Group removed Cyrus Mistry as chairman of the board. Tata Group, which owns a majority of Tata Motors, has global businesses ranging from software development to steel production and is valued at over $100 billion. The auto manufacturer, which consists of Jaguar Land Rover in the U.K. and Tata Motors in India, is the second largest revenue generator for the group.

A few days after his ouster, Mistry fired off a letter saying that the sprawling family of businesses faced losses of $18 billion stemming from poor investments over the years, most of which are from the Tata Steel business in Europe. The group has questioned the truthfulness of the claim, but the statement has taken its toll on the stock nonetheless.

Former group Chairman Ratan Tata has resumed his post for the next four months during a search for a permanent replacement.

Also a surprise news item was the Indian government's Nov. 8 decision to crack down on money laundering and forgery by eliminating its two largest bills, the 500- and 1,000-rupee notes. Holders of the bills could use them for 72 hours after the announcement on basic needs. Other than that, all notes could be deposited at a bank until the end of the year. The government is making a new version of the 500-rupee note and issuing a brand new 2,000-rupee note.

Thus far, the move against corruption and "black money" has disrupted business in the country. The government has struggled to keep up with demand for the new, large bills. On the date of the announcement, Indian stocks, as measured by iShares India ETF (NYSEMKT:INDA), were down nearly 10%. Tata Motors' stock has been no exception thus far. 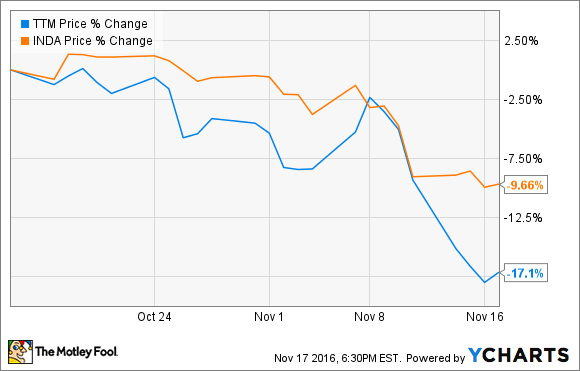 The election of Donald Trump has also raised concerns for the Indian economy overall. Uncertainty over the president-elect's immigration policy and how outsourcing of U.S. jobs to lower-labor-cost countries like India have also contributed to the Indian market's struggles.

Earlier in the year, the U.K.'s decision to leave the European Union cast a shadow on Jaguar Land Rover, a subsidiary of Tata Motors since 2008. At the end of September, the Jaguar Land Rover CEO said there were early signs that some clients in Europe, one of the company's largest markets, were going to boycott British cars.

Though nothing material has yet to come from either political decision, both have the possibility of shaking up Tata Motors' global operations. In recent months, the political climate has started to put a damper on the stock.

While events especially in the past month have caused investor angst in India, these situations have yet to change Tata Motors' business for the worse. Even after the pullback, share prices are still up by double digits year to date, but a good buying opportunity for investors has presented itself nonetheless.

In spite of the spate of potentially bad news, the company continues to report improving sales and profits. The domestic Indian company is posting strong sales and advanced production increases over the same period last year, up 8% through October. Exports, which struggled last year with a slowdown in demand from China, are up 15.4% through October.

The Jaguar Land Rover unit has also had a knockout year, posting best-ever sales months multiple times throughout the year. Sales were up 11.5% in October from last year, and fiscal year-to-date sales are up 20.6%. Much of JLR's success this year is coming from new model releases, including Jaguar's first SUV, the F-PACE. Despite Brexit as a concern, sales in Europe are up 22.8% fiscal year to date.

In the world of investing, there's always something to be worried about. In the case of Tata Motors, those worries have compounded the decline of share prices. However, with business not missing a beat, the drop is unwarranted at this point. The company still looks like a good bet for the long term, with auto sales in India on the rise and the Jaguar Land Rover business stronger than ever.