Since I started writing for The Motley Fool in 2012, investors have constantly asked the same question regarding Caterpillar, Inc. (NYSE:CAT): Is it time to buy low? My answer has been the same since 2012: Caterpillar is a business with real scale and industry leadership, but there's nothing on the horizon to suggest things are about to improve.

Fast-forward to October's sales release, and absolutely nothing has changed. With that said, let's do more than just look at October's results, which is merely a glimpse -- let's put retail sales on a long-term graph and see what the story really is.

Headlines don't do the story justice

If you glance around the internet, a common theme is that Caterpillar's retail sales are falling, but at a slower rate. That's true: The machines retail statistics segment's total -- which includes two segments, resource industries and construction industries -- was down 12% during October, which was better than the prior three months.

Let's look at the long-term graph of the two segments that feed into machine retail statistics' total. First up, resource industries. 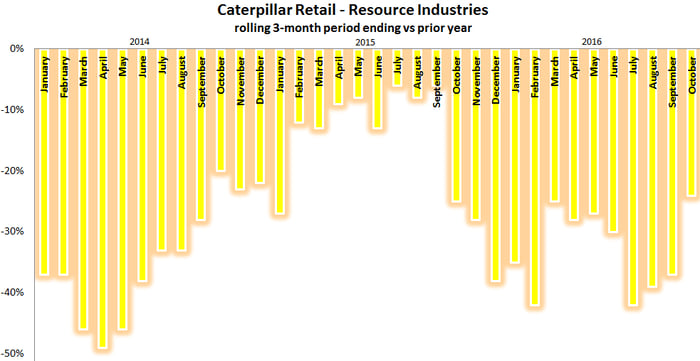 The truth is, Caterpillar's rolling-three-month sales in resource industries -- which revolves around the mining industry -- have plummeted at double-digit rates since late 2015, and they only posted declines of less than 10% in five individual months since 2014. The average decline is a staggering 27%.

Caterpillar's construction industries retail sales have also been consistently declining, but at a less dramatic pace than those of resource industries. 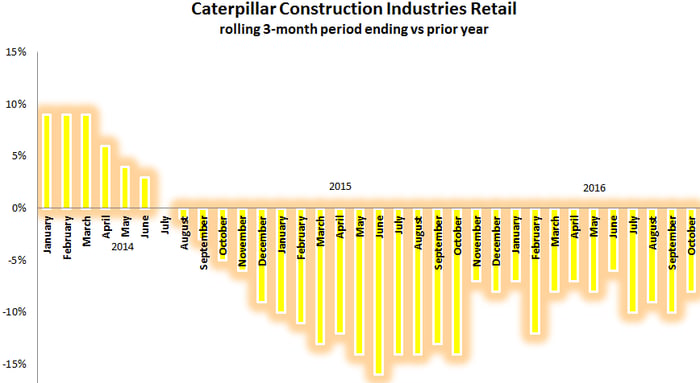 Even Caterpillar's energy & transportation retail stats, which were a bright spot in late 2014 and early 2015, have plunged pretty harshly. 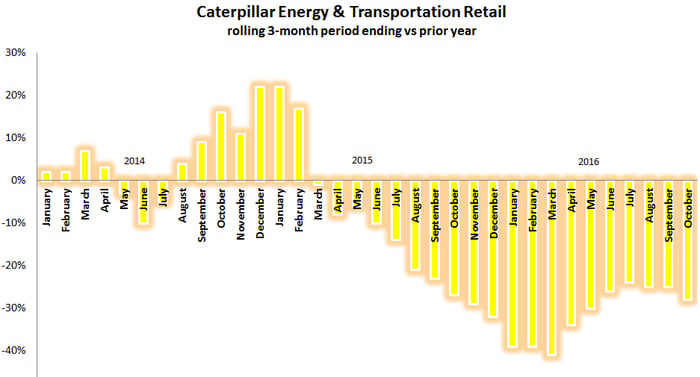 While Caterpillar has done an excellent job of cutting costs and making its business more efficient, its retail statistics continue to face a tough environment.

Economic weakness throughout much of the world persists, and as a result, most of our end markets remain challenged. In North America, the market has an abundance of used construction equipment, rail customers have a substantial number of idle locomotives, and around the world there are a significant number of idle mining trucks.

Very little hope on the horizon

Ultimately, commodity prices are slightly better, but not nearly strong enough to drive an increase in Caterpillar's retail sales. Construction in North America has been slightly weaker than anticipated, and the negative impact of Brexit in Europe is going to weigh on its business. Further, despite having a small partnership with Caterpillar, the fact that Ritchie Bros. Auctioneers (NYSE:RBA) continues to post excellent results in the used heavy equipment market shows many companies aren't willing to pour capital into new heavy equipment, and find used equipment as a valuable substitute, which could depress Caterpillar's top-line over the near-term.

Caterpillar has an impressive brand, and its product portfolio has been a leader over the past century. It's truly a great company, but it's simply stuck in multiple industries with few positive highlights in the past few years, and that doesn't appear to be changing anytime soon.