After struggling under the weight of debt for the past several years, Coeur Mining (NYSE:CDE) made a concerted effort to pay down as much debt as possible. Those efforts have accelerated this year thanks to higher precious metal prices, which not only enabled it to generate excess cash flow but take advantage of its rising stock price to issue equity. The net result has been a dramatic transformation that is putting the company on a path toward a debt-free future.

As of the end of the third quarter, Coeur Mining still had $406.1 million of total debt on its balance sheet. However, that is roughly 60% less than it had one year ago, which when combined with a significant improvement in earnings, pushed the company's leverage from an unsightly 5.6 times total debt-to-adjusted EBITDA in the third quarter of 2016 to just 2.0 times as of the end of last quarter. Even better, when adding in the company's cash on hand, net debt falls to $183.6 million, or just 0.9 times net debt-to-adjusted EBITDA.

Those numbers are expected to drop even further after the company recently completed its $200 million at-the-market offering, which saw it sell another $110 million worth of stock since its last update. The company intends to use that cash, along with its cash balance, to redeem $190 million of its 7.875% senior notes due in 2021. Once complete, the outstanding balance on that set of notes will drop to $178 million, while helping reduce its annual interest payments by $29 million when compared to the year-ago quarter. Because of this, the company should end the year with about $215 million in total debt and net debt that could be below $75 million depending on how much free cash flow it generates in the current quarter. This scenario would push its net debt leverage ratio down to a mere 0.4 times by year-end.

Moving closer to the leaders

That leverage ratio would put it one step closer to joining rivals Silver Standard Resources (NASDAQ: SSRI) and Pan American Silver (NASDAQ:PAAS), which as the slide below shows are already debt-free on a net basis: 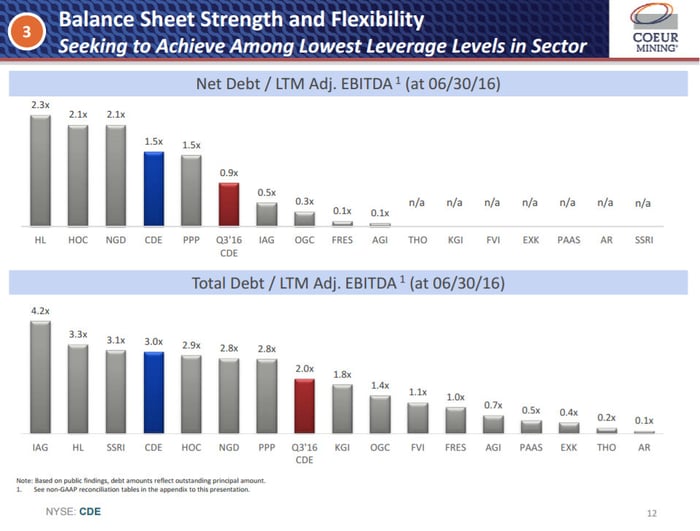 In Silver Standard Resources' case, it still has quite a bit of debt on its balance sheet given its 3.1 times total debt-to-adjusted EBITDA, which is right where Coeur Mining was at the end of June. However, thanks to strong cash flow generation this year, as well as some non-core asset sales, Silver Standard Resources has $278 million in cash on hand, which more than covers its $217 million of outstanding debt. Furthermore, Silver Standard has another $178 million of marketable securities, which if converted to cash implies it could cover its debt twice over.

Coeur Mining is actively looking to achieve a similar future, where it has a modest amount of debt and ample financial resources to capture new opportunities.

Coeur Mining's balance sheet has undergone a dramatic transformation over the past year. In a sense, it has gone from a concerning liability to an asset that the company can use to support future growth. While Coeur still has a bit of work to do before it is as financially fit as Silver Standard Resources and Pan American Silver, it is clearly heading in the right direction.