Advance Auto Parts Inc. (NYSE:AAP) has certainly found the integration of Carquest stores to be a much-harder job than it originally expected, but the new management team has started off by giving investors what they want. Is this a sign that the company has finally turned the corner? And is it now ready to catch up with its sector peers AutoZone, Inc. (NYSE:AZO) and O'Reilly Automotive (NASDAQ:ORLY)?

Followers of the company will be familiar with the investment pitch. Simply put, the hope is that Advance Auto Parts can "pull an O'Reilly Automotive" and succeed with the Carquest integration, thereby establishing itself as a leading dual-store (DIY and do-it-for-me, or DIFM) retailer.

Moreover, there is a huge opportunity for the company to generate operational improvements and get to the kind of operational metrics enjoyed by O'Reilly Automotive and AutoZone. Operating margin, cash flow generation, sales per employee, inventory management, etc. -- you name a metric and Advance Auto Parts probably lags in it.

In other words, the company has a lot of earnings growth potential merely from catching up to its peers. 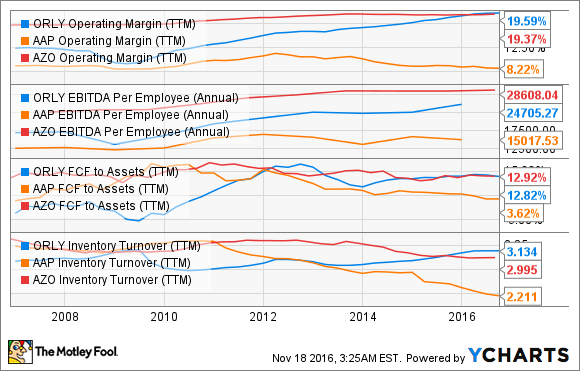 Unfortunately, it's not been plain sailing, and same-store sales growth has lagged that of its peers, while operating margin is seemingly in a downward trend. So what exactly was it about the recent third-quarter results that got the market so excited?

I think there were two key takeaways that prompted the market's reaction:

Let's tackle each point in turn. As you can see below, the same-store sales decline of only 1% was the best result in three quarters. CEO Tom Greco claimed that "to date, our investments have driven sales performance at a faster rate than expected" -- some good news at last. 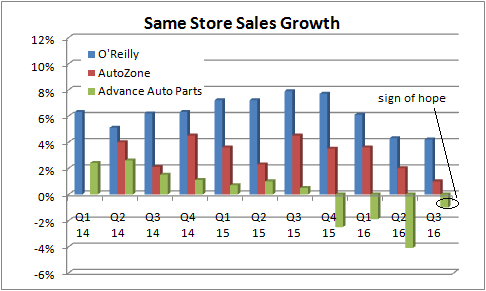 The key points from the company's earnings report included:

To put these figures into context, analysts are forecasting $9.63 billion in sales for 2017 and assuming linear growth to a rate of 4% per annum in 2021, meaning revenue could be around $10.9 billion in 2021. Using the adjusted operating income margin of 9.7% in the third quarter as a base suggests that operating income margin could be 14.7% in 2021.

Three reasons to be optimistic

Of course, all of this sounds wonderful, but the previous management clearly thought it had a handle on the integration process as well. What makes things different this time?

There are three key signs that the current management might make a better fist of it.

First, although he was light on the details (for competitive reasons), Greco signaled that management now has a coherent and clear strategy in place, rather than reacting to difficulties created by the integration as the previous management appeared to be doing.

Second, as you can see in the chart below, the pace of consolidations (Carquest stores are consolidated with nearby Advance Auto Parts stores) has slowed. Greco's words offered details: "We dramatically reduced them by about a third, based on what we originally planned at the time of the deal itself." Meanwhile, conversions (Carquest stores are turned into Advance Auto Parts stores) have been "much more successful overall," according to Greco. 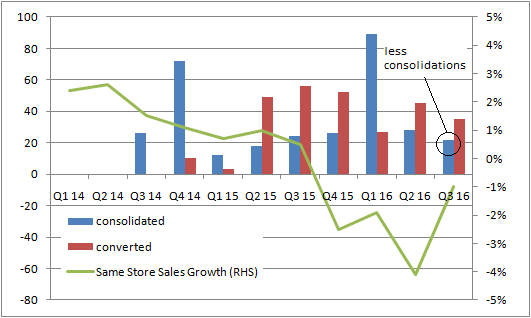 Third, it appears that management previously overemphasized daily replenishment to stores in the Northeast. According to Greco, "We had more stores than we should have assigned to them, at a delivery frequency that was very difficult for them to execute flawlessly."

Shifting the distribution centers toward delivery three times a week has led to "much better fill rates, like significantly better, much better accuracy, and the general managers are much happier, and they're selling more," Greco added.

All told, there is evidence to support the belief that eliminating previous mistakes with the integration will help matters significantly. Meanwhile, the long-term value opportunity remains in place. Clearly, the company has a long way to go before reaching the kind of performance achieved by O'Reilly Automotive and AutoZone, but this quarter's results and outlook act as a tentative marker for better days ahead.