After suffering through a couple quarters of poor results thanks to declining rig activity around the world, this past quarter looks like it was the last of the bad quarters for Helmerich & Payne (NYSE:HP).

The company's results for the quarter may not show improvement on the surface, but there are some operational numbers and guidance from management that suggest things will likely get better. Here's a quick look at the details from Helmerich & Payne's most recent earnings result as well as why management seems much more chipper about the future than it has been in a long time.

As a result of the downturn, Helmerich & Payne has been forced to take a lot of charges and impairments that have had a pretty significant impact on the income statement. This time around, it was a $0.15-per-share loss related to the sale of some of the company's marketable securities. This, combined with the large operating loss, also gave the company a sizable income tax provision that it will be able to carry over into the next few quarters.

From an operational standpoint, things were a bit of a mixed bag. Thanks to additional charges related to abandonment and decommissioning of older rigs, accrued lawsuit liabilities, and increase workman's compensation plans, both direct operating expenses and depreciation expenses increased in the quarter after several quarters of declines. Also, revenue dropped sequentially, but this was expected because there were several early termination fees that were booked. If we were to strip out all of these adjustments, total revenue from continuing operations and rig margins actually improved.

After what could be considered a rather tumultuous year, the company was still able to generate enough cash from operations to cover all capital spending and dividends and add cash to the balance sheet. At the end of the quarter, Helmerich & Payne was sitting on $905 million in cash. 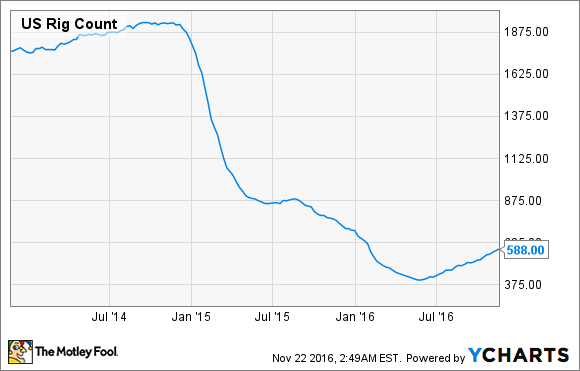 While this is, of course, helpful for all drilling companies, Helmerich & Payne hasn't quite felt the effects as much as others. One reason for this is that many of the rigs that have become active are lower-specification rigs hired by smaller operators and private equity companies trying to keep costs at the absolute lowest levels possible to make a quick buck. Halliburton (NYSE:HAL) CEO Dave Lesar pointed this out as one of the reasons that his company wasn't seeing as strong of an uplift in operations as the rig count might suggest. Since Helmerich & Payne's fleet is a high-specification fleet that specializes in more complex drilling, those bargain-basement drillers aren't using its equipment.

That being said, there were some modest improvements in the company's business segments that suggest better times are around the bend. Rig utilization rates across all three segments -- U.S. land, international land, and offshore -- increased. Also rig margins in its international segment jumped enough that it was able to mitigate losses to just $162,000 for the quarter.

For the most part, CEO John Lindsay's statement about the quarter was pretty boilerplate language for a management team facing hard times. One thing that he did point out that portends Helmerich & Payne's success in the coming quarters is the flexibility to adjust its fleet of rigs to the demands of the market.

An example of H&P's industry leading capability is our current fleet of AC drive FlexRigs that have 7,500 psi circulating systems and multi-well pad drilling capability.  These rigs meet the general criteria of what some industry followers have identified as 'super-spec' rigs, which is a subset of AC drive rigs with 1,500 horsepower drawworks ratings.   We have approximately 80 of these rigs in our U.S. land fleet, and if demand remains high we could upgrade additional FlexRigs and have approximately 120 of these rigs by the end of our 2017 second fiscal quarter.  The current industry capacity for additional super-spec rigs appears to be limited, which positions H&P very well for future expansion in this space.  In the event of a significant market improvement for super-spec rigs, we have the capability of providing a total of approximately 270 rigs to the market without requiring new build rigs, by solely relying upon upgrades where needed to our current FlexRig3 and FlexRig5 fleet.

Here's the significant part of that statement: The number of rigs that Helmerich & Payne can upgrade to what are labeled "super-spec" rigs is larger than the total fleet of rigs that any of its major competitors have. So if companies want to continue to drill more and more complex wells, Helmerich & Payne is going to take significant market share. 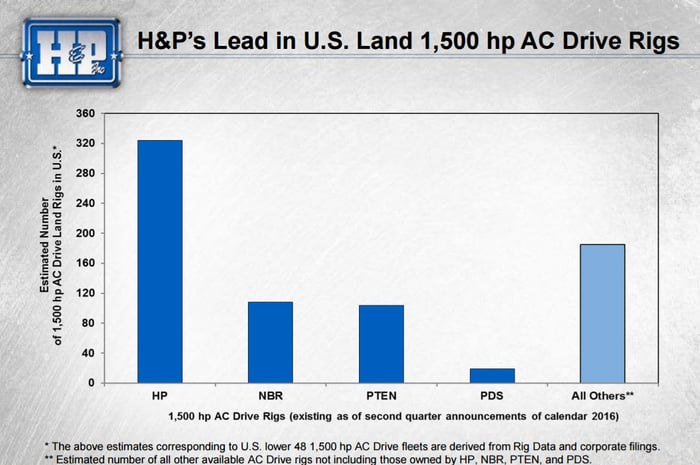 This is probably the most encouraging news for the company. According to management, it expects revenue days (the total amount of days its fleet of rigs is working) for its U.S. land rigs to increase by 20% as many larger exploration and production companies increase their capital spending. Its international land segment is also expected to increase by about 5% while its offshore segment will remain flat. Since its U.S. land fleet is the largest revenue generator, it's encouraging to see it generate the largest gains.

Yes, the numbers for this most recent quarter weren't great, but it appears that we have hit the bottom here as drilling activity from the larger operators picks up and they employ higher-specification rigs. This plays very well into the company's hands and should lead to a much brighter 2017.