Wireless-chip specialist Qualcomm (NASDAQ:QCOM) recently announced its next-generation premium mobile processor, called the Snapdragon 835. The processor promises to provide more computing, graphics, and wireless performance than Qualcomm's prior-generation Snapdragon 820 and 821 chips. It is also, as Mashable points out, "the chip that will power every premium Android phone in 2017."

Perhaps most interestingly, it will be manufactured using Samsung's (NASDAQOTH: SSNLF) 10-nanometer chip technology. This, Qualcomm apparently boasted, means that its mobile chips have now taken the lead in terms of chip manufacturing technology away from processors targeted at personal computers.

What Qualcomm seems to be implying is that it's now beating microprocessor giant Intel (NASDAQ:INTC), which supplies most of the world's personal-computer processors, at its own game.

Let's take a closer look at what's going on here.

Is Qualcomm a full generation ahead of Intel? 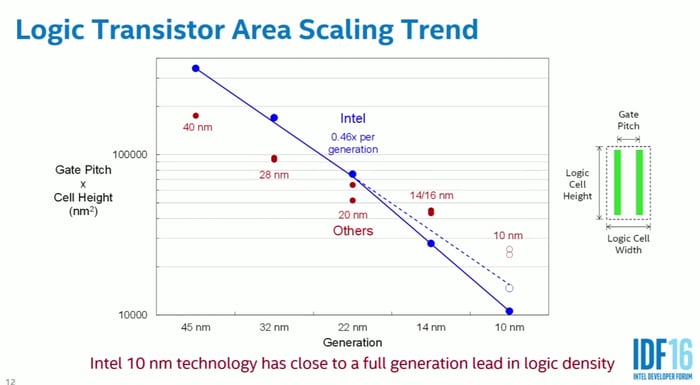 So for Qualcomm to imply that it's a full generation ahead of Intel is an example of marketing at work. Further, Intel is planning to introduce the first products built on its own 10-nanometer technology in late 2017, which should allow it to pull decisively ahead again -- at least for a little while.

That's not the point, though. The point is that, as Qualcomm pointed out in a presentation, mobile processors have gone from being manufacturing-technology laggards relative to the personal-computer industry to being arguably in a leadership position in just five years.

Does Intel plan to fix this?

Performance enhancements over time are certainly welcome, as they allow Intel to build better products with each generation. However, the fact that Intel has backed off on shrinking chip areas at a two-year cadence while its competitors aim to stay on that pace is a red flag.

I believe that Intel needs to increase its investments in chip-manufacturing technology and work tirelessly to try to regain an unequivocal and lasting technology leadership position. Otherwise it risks eventually being left in the dust by the top mobile-chip sellers and their contract chip manufacturers.