One controversy surrounding Apple's (NASDAQ:AAPL) latest MacBook Pro computers is that users can't configure them to include 32 gigabytes of system memory, also known as RAM. Those shiny new computers are limited to 16 gigabytes of RAM.

Though 16 gigabytes is probably more than enough RAM for most consumers, there are professionals, prosumers, and possibly even spec-geeks who want even more.

The MacBook Pro uses 16 GB of very fast LPDDR memory, up to 2133MHz. To support 32 GB of memory would require using DDR memory that is not low power and also require a different design of the logic board, which might reduce space for batteries. Both factors would reduce battery life.

It has been suggested that Apple could avoid this battery life/RAM capacity trade-off in its MacBook Pro computers if it equipped them with a newer memory type known as LPDDR4.

Indeed, Apple would probably jump at the opportunity to up-sell potential MacBook Pro buyers to 32 gigabytes of RAM. Computer makers tend to charge premiums that are well in excess of incremental cost for additional memory, and Apple is no different.

It's a tried-and-true way for personal-computer vendors to bring in more revenue and boost their profit margins.

However, the logic that controls how the processor and memory communicate -- called a memory controller -- is built directly into the processor. This means that for Apple to use LPDDR4, the processors that power the systems need to support it.

I had believed that Intel's eighth-generation Core processors would support LPDDR4, lifting the memory-size restriction imposed by LPDDR3. Recent leaks around Intel's next-gen processors suggest that this won't be the case, though. 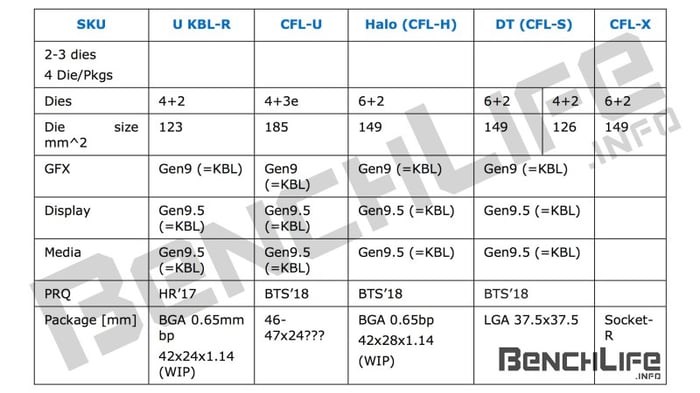 This table indicates that Coffee Lake-H and Coffee Lake-U, Intel's eighth-generation Core processors, suitable for MacBook Pro-like systems, will use the same processor and graphics architectures as Intel's prior two processors, Skylake and Kaby Lake.

That means Apple is going to have to wait for the generation after Coffee Lake, which is likely to be a processor family called Ice Lake, for LPDDR4 support. For consumers, that means no MacBook Pro options with 32 gigabytes of RAM until those chips are out.

Intel is -- at best -- on an annual product release cadence. Coffee Lake for high-performance notebooks is expected to arrive between February and April of 2018. As such, investors shouldn't expect Ice Lake to arrive until sometime in the first half of 2019.

It's also worth noting that Apple no longer seems interested in being among the first to adopt new Intel processors. Apple's MacBook Pro computers launched last month use processors that launched in September 2015.

As such, Apple might not adopt Ice Lake until the latter half of 2019. It might be years before Apple finally offers MacBook Pro computers configured with more than 16 gigabytes of RAM.