Now that the votes have been cast and counted in favor of Donald Trump, the country is turning its attention to whom the president-elect will select for the major cabinet posts. Among the many important positions up for grabs is secretary of energy, and the leading candidate is reportedly Harold Hamm, the founder and CEO of Continental Resources (NYSE:CLR). While Hamm is an excellent oilman and would bring a wealth of knowledge to the position, he has a history of making big bets that don't always pay off. While those failed gambles are a concern, there are more important reasons why this is not the best job for the oil executive.

Who is Harold Hamm?

Harold Hamm embodies J. Paul Getty's formula for success: "Rise early, work hard, strike oil." At 21 he founded what would become Continental Resources, which is now a multibillion-dollar oil company. Fueling that wealth was Hamm's foresight to apply the same combination of new technologies -- horizontal drilling and hydraulic fracking -- that had worked on shale gas formations to the oil-prone rocks in North Dakota's Bakken shale. Doing so unleashed a torrent of oil that helped reverse decades of production declines in the U.S.

While Hamm's early risk-taking in the Bakken paid off handsomely, his gambles have not always come out on the winning side. One of his most prodigious misses came in late 2014 right after oil prices started to collapse. In a bold move, Hamm told Continental's investors:

We view the recent downdraft in oil prices as unsustainable given the lack of fundamental change in supply and demand. Accordingly, we have elected to monetize nearly all of our outstanding oil hedges, allowing us to fully participate in what we anticipate will be an oil price recovery. While awaiting this recovery, we have elected to maintain our current level of activity ...

In monetizing those hedges, Hamm not only exposed his company to the full upside of rising oil prices but also to the downside, should prices continue dropping. And a drop is exactly what happened. Hamm, like most other industry observers, had missed the fact that the fundamentals of supply and demand were indeed changing, with supplies starting to far outstrip demand due to surging shale production as well as rising production from OPEC and Russia. As a result, oil prices crashed, which at one point obliterated billions of dollars in value for Hamm and his investors: 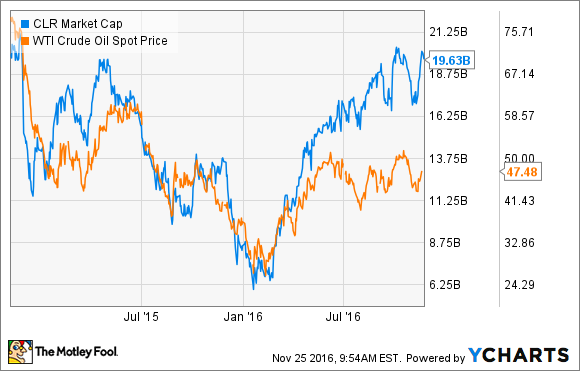 That is not the only time Hamm got oil wrong. This past July he told CNBC that he was ratcheting up his 2016 oil price forecast. Hamm already had a bullish outlook that crude would touch $60 a barrel by the end of the year. However, due to his belief that demand would start significantly outpacing declining supplies, he boosted his price target to between $69 and $72 per barrel at year-end. As things stand right now, with crude currently below $50 a barrel and just over a month left this year, it is not looking good for his forecast.

Eternal optimism on oil prices runs through the DNA of the oil patch. The potential problem with Hamm as energy secretary is not his view on oil but instead boils down to the position itself. Created in 1977, the Cabinet position is tasked primarily with advancing the country's energy security and technology, as well as dealing with nuclear waste disposal. It is that latter point, which eats up half of the Department of Energy's budget, that is troublesome, because it is not an area in which Hamm has much expertise. This aspect of the position is one reason why all of the country's former energy secretaries have either been politicians or had a background in academics.

Further, while a primary focus of Trump's America-first energy plan is squarely on energy security, which certainly falls under the purview of the Department of Energy, the main fuel of that plan is natural gas, not oil. In the vision Trump laid out, he wants to "encourage the use of natural gas and other American energy resources that will both reduce emissions but also reduce the price of energy and increase our economic output." While Continental produces a substantial amount of natural gas, Hamm, and his fellow Bakken peers, has a long history of wasting this precious resource by burning it off because that was the cheapest option given that there wasn't enough infrastructure to move the gas to market.

Those issues aside, Hamm's strength is his intimate knowledge of the problems plaguing the shale industry, particularly the difficulty obtaining drilling rights on federal lands, as well as the burden of excessive regulations. Correcting these two obstacles to business is an essential pillar of Trump's America-first energy platform to reinvigorate the country's energy sector and get us on a path toward energy independence. However, neither falls under the Energy Department's responsibilities; they are instead issues regulated by the Department of the Interior and the Environmental Protection Agency.

Because of this, Hamm would be better-suited working with Mr. Trump to fix these fundamental problems than leading a bureaucratic institution tasked with cleaning up nuclear waste. A role along the lines of an energy independence czar or a chief energy strategist would not only be a more appropriate fit for Hamm, but would have an important part in fulfilling Trump's energy vision. It would allow the oil executive to funnel the eternal optimism he has for the U.S. oil industry to influence the policy decisions needed to remove roadblocks without having to focus on some of the more mundane issues that come with holding a Cabinet-level position.