After several years of massive gains, Spirit Airlines (NYSE:SAVE) shares plunged during 2015 as the ultra-low-cost carrier started to suffer from price matching by larger rivals. The stock ultimately fell by roughly 60%.

Spirit Airlines stock finally bottomed out in late 2015. Since then, it has rallied more than 50% and is approaching the $55 level. Yet that still leaves the stock well below its all-time high of $85.35. 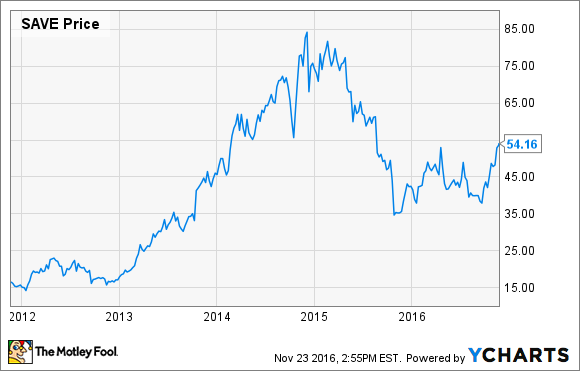 Spirit Airlines still has massive growth opportunities ahead. Indeed, European ultra-low-cost carrier Ryanair is roughly three times Spirit's size -- and still growing at a healthy clip -- despite serving a similar-sized market. As Spirit follows its growth plan, the stock could rally to $100 or beyond by 2020.

A pause in earnings growth

Spirit Airlines' operating margin surged from 12.6% in 2012 to 23.5% in 2015 as the company perfected its ultra-low-cost carrier operating model and as fuel prices plummeted. This enabled a run of extraordinary earnings growth. In total, Spirit's earnings per share roughly tripled during this period, driving the huge rally in Spirit Airlines stock. 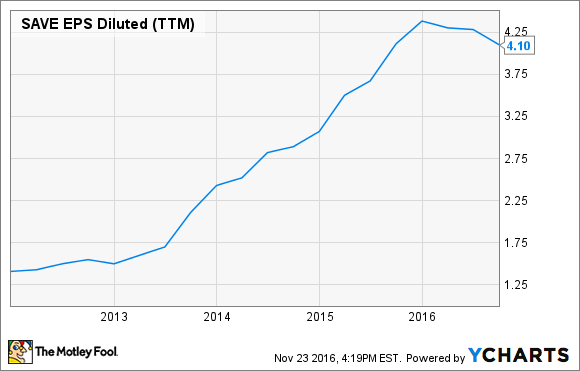 Analysts currently expect Spirit's adjusted EPS to decline from $4.37 in 2015 to $4.02 in 2016, before slipping again to $3.96 in 2017. Investors apparently expect relatively little growth in future years. Spirit Airlines stock trades for less than 14 times forward earnings, a significant discount to the broader market.

This view is shortsighted. By the second half of 2017, Spirit Airlines is likely to return to strong earnings growth as its profit margin stabilizes.

For several years, Spirit Airlines executives have said that the carrier will only grow in markets where it can earn an operating margin of at least 15%. However, Spirit's operating margin surged well beyond that last year, leading to a quick spike in earnings.

In the long run, Spirit Airlines' operating margin could be somewhat higher than 15%, as some routes will be more lucrative than the minimum target. Nevertheless, an operating margin above 20% probably isn't sustainable in light of Spirit's growth objectives.

By next year, Spirit's profit margin should be back to a more sustainable level. If the company can achieve modest unit revenue increases in the years ahead, EPS should return to steadier growth.

Unit revenue is already moving in the right direction -- and at a rapid pace. Spirit's total revenue per available seat mile (TRASM) fell 14.1% in the first half of the year, but declined just 7% last quarter. For Q4, Spirit expects TRASM to decrease just 3%-4.5% year over year, despite some unfavorable calendar shifts relative to Q4 2015.

To keep unit revenue moving in the right direction, Spirit Airlines has altered its route strategy. It is looking for more opportunities in small and midsize markets and seems particularly interested in adding flights to Florida. The idea is to move away from challenging the legacy carriers in their biggest hubs (where they feel compelled to defend their market share through price matching).

As Spirit's new routes start to mature, TRASM should return to growth in early 2017. (Many analysts appear to be projecting that TRASM will be roughly flat next year, but this seems overly pessimistic.) This also means that earnings could return to growth sooner than analysts expect, although Spirit Airlines does face some potential cost headwinds in the first half of 2017.

Once Spirit Airlines stabilizes its profit margin, its earnings should grow at least as quickly as its planned capacity growth rate of 15%-20%. This means that EPS will likely reach at least $6 -- and quite possibly as high as $8 -- by 2020. With EPS at that level, and with plenty of room for further growth, Spirit Airlines stock could be worth $100 or more by 2020.