NVIDIA (NASDAQ:NVDA) has been in fine form in 2016 as terrific financial growth and dominance in graphics processing units (GPUs) have helped shares gain more than 180%. The good news is that NVIDIA's fourth-quarter guidance clearly indicates that the company is not going to run out of fuel anytime soon.

After reporting 54% year-over-year revenue growth to $2 billion in the third quarter, NVIDIA expects an almost identical revenue jump of around 50% for the fourth quarter. The company's aggressive revenue growth forecast for the ongoing quarter does not seem out of reach considering the rate at which discrete GPU shipments are growing.

The most important highlight of NVIDIA's third-quarter performance was the strength in the GPU segment as the company's total GPU shipments increased 39% quarter over quarter according to data from John Peddie Research. What's even more important to note here is that NVIDIA grew its overall GPU market share by 2.2% as compared to the second quarter, which means that it ate into Advanced Micro Devices' (NASDAQ:AMD) market share.

In comparison, AMD's GPU shipments increased 15% last quarter, while the overall industry growth stood at 20%. Thus, NVIDIA outpaced the industry's growth and its archrival AMD by a huge margin last quarter. The reason why NVIDIA grew at a faster rate than the industry was because of its Pascal line of discrete GPUs, which were launched in May this year.

Driven by the new GPUs, NVIDIA witnessed a 59% quarter-over-quarter jump in revenue in the gaming business, which is its largest segment with 62% of overall revenue. The strength in PC gaming is all set to continue in the long run, which means that NVIDIA's dominance in this space should continue.

According to a report by DFC Intelligence, the worldwide PC gaming market will be worth $42 billion by 2020, up from $30 billion at the end of last year. This implies 40% growth over the next five years with almost all key geographies witnessing growth in PC gaming. 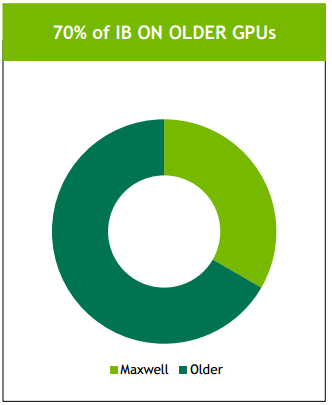 The majority of the growth in PC gaming will be driven by core and moderate gamers, which currently number 300 million across the globe, as DFC Intelligence points out. These gamers are more likely to buy AAA-class games, which are developed with multimillion dollar budgets and are highly graphic-intensive.

Such games require powerful gaming PCs to run, which is why NVIDIA's discrete GPUs will continue gaining traction as the addressable market improves. As a result, NVIDIA will witness an increase in its discrete GPU sales as the majority of its installed user base is currently running older generation GPUs.

Driven by upgrades and the growth in PC gaming, it is anticipated that global GPU shipments will surpass 67 million units annually in 2020, according to Research and Markets. In comparison, total GPU shipments in 2015 stood at less than 30 million units, indicating that the market could more than double.

Additionally, NVIDIA has strengthened its discrete GPU lineup that will allow it to capture more of the end market going forward. The company's latest Pascal series of GPUs are able to deliver a relatively better graphics performance with less electricity consumption. In fact, NVIDIA claims that its GTX 1050i GPU is 40% faster than the competition and consumes 128% less power. Therefore, as NVIDIA is focused on staying ahead of the curve in the GPU market by releasing more powerful and efficient products, it should be able to maintain its dominance in the long run.

Self-driving cars are the next big thing

Gaming GPUs are NVIDIA's the bread and butter, and they have helped the company record tremendous growth in recent quarters. But, the automotive business could be the one that will help NVIDIA go to the next level in the coming years as autonomous cars gain traction.

Last quarter, NVIDIA's automotive business grew 61% year over year. Though this segment is less than 10% of NVIDIA's revenue currently, it could become very big in the long run as the company is in the midst of the self-driving car revolution. There are varying forecasts as to how big the self-driving car market is expected to become.

NVIDIA predicts that the market for self-driving cars will grow to 15 million, which will increase the need for features such as deep learning that the company is currently developing. Additionally, it says that 20 million cars will have advanced driver assistance features, or a digital cockpit, going forward. This will create a robust revenue opportunity for NVIDIA. 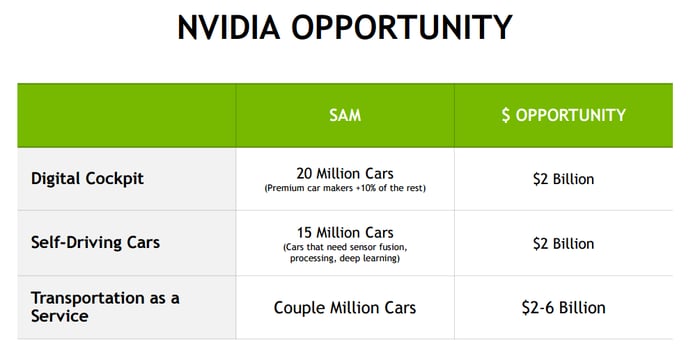 NVIDIA is well-placed to tap the end-market opportunity as it is already working with one of the pioneers in this segment, Tesla Motors (NASDAQ:TSLA). Last month, the company announced that Tesla will be using the NVIDIA DRIVE PX2 technology across all of its cars -- the Model S, the Model X, and the Model 3.

The NVIDIA DRIVE PX2 is an artificially intelligent computing platform that is based on deep learning and will be deployed through an on-board supercomputer in Tesla cars. The new platform is already in the production phase and has 40 times the processing power compared to the previous iteration, allowing cars to process radar, sonar, and vision-based data at fast speeds.

NVIDIA's GPU segment is strong enough to help it sustain its terrific growth going forward as more advanced games hit the market. On the other hand, NVIDIA is trying to secure its future by moving early in autonomous cars and partnering with a bellwether like Tesla Motors. NVIDIA is pulling the right strings, and this should please investors, as it appears capable of keeping up its growth momentum for a long time.