As 2016 winds down, it's natural for investors to take stock of their financial portfolios. With that in mind, we asked a few Motley Fool specialists to select their best ideas to get investors started off with a bang in 2017. Their answers: Amazon.com (NASDAQ:AMZN), Under Armour (NYSE:UAA) (NYSE:UA), General Electric (NYSE:GE), VF Corp. (NYSE:VFC), Mastercard (NYSE:MA), Kinder Morgan (NYSE:KMI), and Helmerich & Payne (NYSE:HP). Read on to see their investment theses for these stocks.

This stock will keep you warm at night

Dan Caplinger (VF Corp.): Some of the best stocks fly under the radar of most investors. VF Corp. is one such company, with an eminently forgettable name that nevertheless is the force behind top brands including The North Face, Vans, Timberland, and SmartWool, as well as Wrangler and Lee jeans and a host of other licensed product arrangements. The company not only sells products through its own proprietary stores but also serves as a wholesaler for other retail businesses, including department stores, specialty stores, and mass merchants.

VF has put together a strong track record of performance, with average annual returns of 12% going back 30 years. Yet retail weakness in recent years has hurt VF's share price, making now an attractive opportunity to jump in and take advantage of those choosing to sell to harvest tax losses.

VF has also boosted its dividend for 44 straight years, including an impressive 14% increase announced within the past couple of months that sent its quarterly payout to $0.42 per share. That gives VF stock a 3% yield, and with improving prospects for the retail industry as the holiday season begins, the apparel maker is in a good position to start delivering better total returns to shareholders in 2017 and beyond.

Our fickle market got this one wrong (again)

Steve Symington (Under Armour): Shares of Under Armour have fallen around 20% over the past month as of this writing -- to near a fresh 52-week-low -- on the heels of its third-quarter 2016 results. But that's not to say those results were bad.

So what was all the fuss about? During the subsequent conference call, management detailed plans to make aggressive investments in bolstering Under Armour's retail presence, footwear business, and international distribution, which meant reducing its previous $800 million goal for operating income in 2018.

In addition, the market frowned upon lower-than-expected gross margin in the near term, even though that result came primarily from the relative outperformance of Under Armour's lower-margin footwear and international businesses -- something that I incidentally suggested two months ago would happen, as I took the opportunity to explore the risks that could cause shares to temporarily decline.

This isn't the first time we've seen Under Armour prove the market wrong after similar short-term-oriented declines. I think this is a fantastic opportunity for long-term investors willing to buy Under Armour shares this month.

Evan Niu, CFA (Amazon.com): A few years ago, fellow Fool Eric Bleeker mentioned in a passing comment to me that it might make sense to buy Amazon almost entirely based on the success of Amazon Web Services (AWS). That was before Amazon began disclosing financial results for its AWS segment, but it was still obvious that AWS was the leader in the cloud infrastructure market and was just starting to scale profitability. Neither Eric nor I ended up investing in Amazon as a result of our conversation, but we probably should have.

Amazon started disclosing AWS results last year, and it's safe to say that AWS is indeed crushing it. It's Amazon's most profitable operating segment, by far -- so it wouldn't even be that misplaced to invest in Amazon primarily for the AWS segment, even though the core business remains related to e-commerce operations. Sales continue to march higher, and operating leverage is starting to kick in as margins expand. 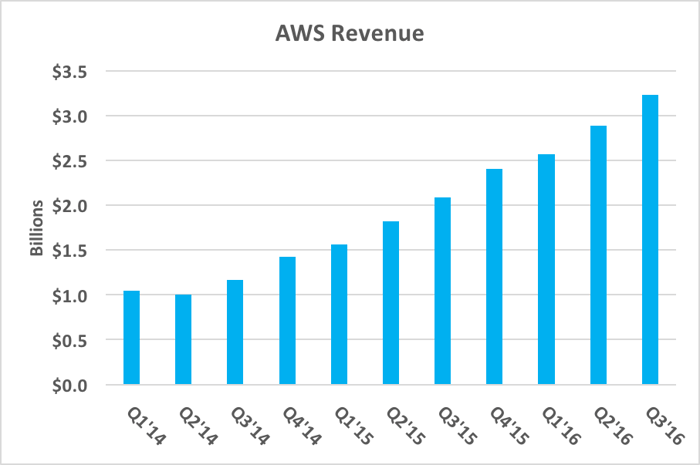 Meanwhile, in the wake of Donald Trump's election victory, many tech stocks have pulled back. In particular, Jeff Bezos had antagonized Trump on numerous occasions, spurring speculation that Trump will retaliate in some way now that he's on his way to the presidency. The related fear could end up creating a buying opportunity, as Amazon's e-commerce business remains massive and AWS has become incredibly important to Amazon's bottom line. The cloud infrastructure market is only going to get bigger going forward.

This pipeline giant has several catalysts on the horizon

Matt DiLallo (Kinder Morgan): Energy infrastructure behemoth Kinder Morgan has had its share of ups and downs over the past couple of years. However, with the oil market starting to mend and its financial situation doing the same, the company is poised for better things in 2017, including the possible realization of three key catalysts.

The closest catalyst is the looming deadline for the approval of the company's Trans Mountain pipeline expansion project in Canada. The country intends to make a final decision on Dec. 19, and all indications are that it will approve the project. That approval will not only lift a weight of uncertainty but also give the company additional value creation options.

Next on the docket is Donald Trump's inauguration early next year. Trump ran on an America-first platform, which includes putting the country on the path toward energy independence. To do so, we need more pipelines, which should open new growth opportunities for Kinder Morgan and potentially drive pipeline stocks higher.

Finally, after slashing its dividend 75% at the end of last year to conserve cash, Kinder Morgan is getting closer to breathing new life into its payout. Analysts believe that the company could more than double its payout by the middle of 2018, if not sooner. One catalyst for fueling a quicker boost could come if the company were to secure a strategic partner to help fund the Trans Mountain expansion, because it could then divert some of the cash flow earmarked for construction back to investors.

With so many catalysts on the horizon, December looks as if it could be an excellent time to buy this beaten-down stock.

General Electric has both short-term and long-term drivers

Jamal Carnette, CFA (General Electric): Although the S&P 500 is sitting near an all-time high, certain sectors have seen an uneven recovery. For example, financials have continued to underperform. Before the recession, General Electric could best be described as a bank, with its financing arm providing approximately half of the company's profits. Last year CEO Jeffery Immelt decided to part ways with the banking part of the business, to return to GE's roots as a manufacturing-based conglomerate and eschew the risk and regulation involved with running a financial institution.

In the short term, General Electric should benefit from a few facets of Donald Trump's economic plans. The company's transportation division will benefit from a large-scale infrastructure improvement package. General Electric would also rank among the biggest winners from a possible tax-repatriation "holiday," which appears increasingly likely to happen under the Trump administration. Earlier this year, an Oxfam report named GE as the company with the second-largest foreign-cash stash -- $119 billion, based on 2014's financial statements. While parting with its financing unit changes those figures, GE will still benefit its shareholders with repatriation.

However, these are all short-term drivers that don't affect the long-term thesis. For that, look no further than GE's Industrial Internet of Things business. In the long run, the combination of smart, predictive infrastructure with predictive analytics, machine learning, and cyber-security should be a trillion-dollar opportunity. General Electric is currently in the driver's seat of this nascent industry, and the growth should pay dividends for years to come.

Mastercard is ready to cash in on India's war on cash

Neha Chamaria (Mastercard): Nov. 9 was an unsettling day for India, as Prime Minister Narendra Modi declared high-denomination currency notes no longer legal tender. The change happened literally overnight, in a bid to wipe out illegally earned money and curb tax evasion. Modi's move is nothing short of a war on cash: It has wiped out a staggering 80% of the country's total cash in circulation.

As Indians now make a beeline to open bank accounts and get hold of debit and credit cards, one company that could make a killing is Mastercard. Here are two numbers you must know: India's population is a little over 1.25 billion, but only about 26 million credit cards were in use, according to central-bank estimates for July. So you can imagine the massive opportunity that lies ahead for Mastercard.

I believe Mastercard might be better positioned to ride India's digital growth story than Visa (NYSE:V) is, for two reasons. First, Mastercard has a larger global footprint, having generated 60% of its revenue from outside the U.S. in 2015. Visa, in comparison, derived roughly half of its revenues from the U.S. last year. Second, and more importantly, Mastercard is led by Indian native Ajay Banga, who earlier had partnered with the Indian Banks' Association and the government to help frame policies that would promote digital payments in the country.

Mastercard is already on strong footing, having grown its revenue and net income by 12% and 7%, respectively, during the first nine months of the year. With India opening its doors wide now, Mastercard could surpass analysts' estimates of 15% EPS growth in the next five years. I think India's fresh "go cashless" mantra has just made Mastercard an even more compelling long-term buy now.

Todd Campbell (Helmerich & Payne): It's no secret that lower oil and gas spot prices have decreased demand for Helmerich & Payne's land rigs, but I think there are two big reasons it makes sense to add this company to your portfolio before the calendar turns to 2017.

First, while the number of active land rigs is down year over year, the number of U.S. land rigs has increased from 380 to 570 since May. That's an encouraging trend, especially since we're moving into winter, when cold weather tends to support energy prices. 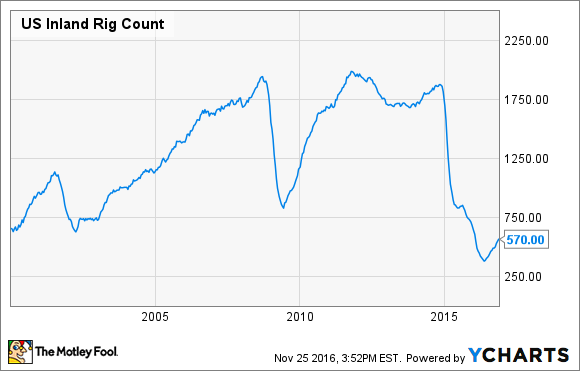 Second, Donald Trump's victory could lead to rising land-rig utilization. On the campaign trail, Trump was an advocate for U.S. energy independence, deregulation, and the opening of federal lands to drillers. If Trump's infrastructure spending improves energy transport and storage, industry roadblocks disappear, and exploration and development occurs on resource-rich government land, then Helmerich & Payne shares could rally nicely higher, particularly if the majority of demand ends up being for highly profitable horizontal rigs that are used in shale oil and gas production.