For Apple's (NASDAQ:AAPL) important holiday quarter, management is guiding for the company's gross profit margin to drop between 160 and 210 basis points. When viewed alongside the year-over-year declines in the three quarters before it, this underwhelming guidance for the important profitability metric could be a cause for concern for some investors.

But a closer look at what's going on with Apple's gross profit margin suggests the tech giant is probably doing better than it looks when it comes to profitability.

For its first fiscal quarter of 2017, which coincides with the fourth calendar quarter of 2016, Apple management expects gross margin to be between 38% and 38.5%, down from 40.1%. Even if Apple achieves the midpoint of its guidance range for gross profit margin, this would undoubtedly mark a notable decline. But investors shouldn't fret; there's good reason for the year-over-year pullback.

When asked about Apple's lower-than-expected guidance for its first-quarter gross profit margin, Apple CFO Luca Maestri broke down the factors that are driving the difference in the year-ago gross profit margin and Apple's guidance:

In other words, after excluding impacts of Apple's patent infringement award in the year-ago quarter and currency headwinds, management only anticipates its first-quarter gross profit margin to decline between about 55 and 115 basis points year over year. Further, much of this expected year-over-year decline in gross profit margin is expected to be a factor of higher cost structures; so, Apple's profitability doesn't seem to be suffering from any negative secular trends -- unless, of course, this higher cost structure for the quarter is the beginning of a sustained period of rising costs.

But it's unlikely higher costs are here to stay. Apple has dealt with temporary higher cost structures in the past, when it launched the iPad Mini and at times when it refreshed lots of its product lines around the same time.

Looking beyond a tough, and arguably unfair, year-over-year comparison, there's probably an even better reason for Apple investors not to be concerned: A zoomed-out view of Apple's quarterly gross profit margin over a period of several years shows that a gross margin of around 38% to 38.5% isn't really so abnormal for the company. Between the fourth quarter of 2013 and the fourth quarter of 2016, Apple's gross margin has bounced around between about 37% and 40.1%. 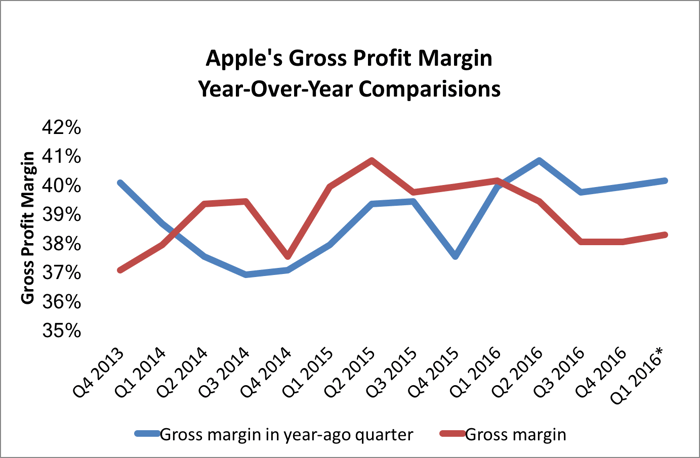 Data retrieved from Apple SEC filings for quarters shown. Quarter with an asterisk is the midpoint of management's guidance. Chart source: author.

So Apple's expected gross profit margin during the first fiscal quarter of 2017 certainly isn't anything to be excited about. But it's also not worth worrying about.

When should investors start worrying about Apple's gross profit margin? If the key metric ever begins to consistently trend downward for more than a few years, this could be more indicative of more secular negative factors, such as declining pricing power, permanently higher cost structures, or unfavorable products mix shifts, that could be here to stay.

Of course, it doesn't hurt for investors to look into quarter-to-quarter volatility of Apple's gross profit margin, given how important it is to an investing thesis in Apple stock. As a cash cow, anything that hinders the company's ability to rake in high levels of profits is worth a closer look.

In this particular case, the driving force behind Apple's lower gross profit margin doesn't look like it's a problem. Indeed, I'd argue that Apple's gross profit margin today continues to support the company's impressive ability at sustaining pricing power and scale in evolving markets.