2016 has been a surprisingly good year for gaming stocks. Wynn Resorts, Limited (NASDAQ:WYNN), Las Vegas Sands Corp. (NYSE:LVS), and MGM Resorts International (NYSE:MGM) all surged by double digits, helped by some signs of recovery in Macau. But Caesars Entertainment Corp. (NASDAQ:CZR) lagged well behind competitors, actually losing ground this year. How did Caesars become the worst gaming stock of 2016? 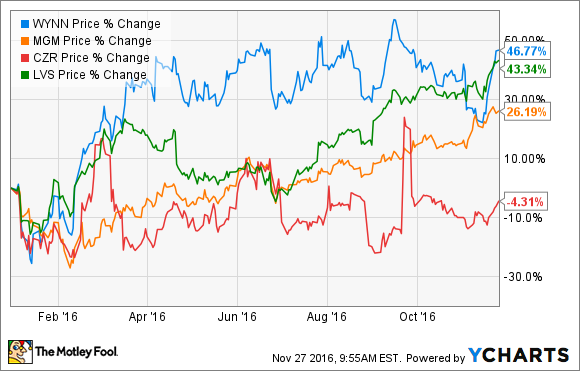 How Caesars failed where others succeeded

Why competitors succeeded in 2016

Growth for Wynn, Las Vegas Sands, and MGM was driven largely by Macau, which was in a steep gaming decline until the summer of 2016. In August, Macau showed its first year-over-year growth in gaming revenue since 2014, and September and October growth hit 7.4% and 8.8%, respectively. Investors are betting the region is finally on the upswing, and if they're right, that would be great news for gaming companies as the region is the largest gaming market in the world.

The reason Caesars Entertainment didn't benefit from the positive Macau developments is that it doesn't have any exposure to Macau. The company didn't get a concession for gaming there, partly because it was bogged down by debt that eventually left CEOC in bankruptcy.

The performance of gaming stocks over the next year will depend on the same factors that drove the sector in 2016. Caesars may finally complete its restructuring and investors will want to watch how the valuation of the new company plays out. I think current shareholders will be disappointed with what they end up with, which could mean more downside for the stock.

In Macau, performance will depend a lot on the trajectory of gaming revenue. Las Vegas Sands and Wynn Resorts recently opened new properties on Cotai, and MGM Resorts will open a property in the middle of next year. If revenue growth continues, there will be plenty of money to be spread around and profits could rise overall, driving stocks higher as well. But if gaming goes into another decline, it could be a rough year ahead.

Once again, bankruptcy court and Macau's gaming market will drive gaming stocks in 2017, just as they did in 2016.