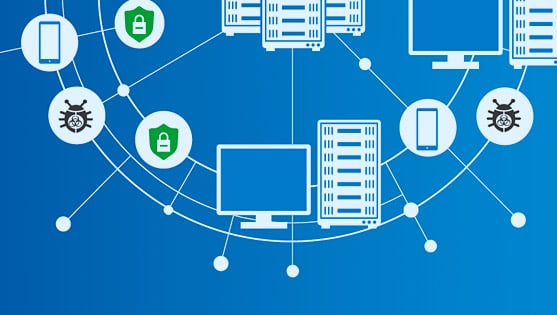 Cisco Systems (NASDAQ:CSCO) is facing intensified pressure in its market, including the entrance of Amazon.com (NASDAQ:AMZN) and its cloud-based solutions, as well as other companies that that seek to disrupt the information-technology industry in which Cisco is one of the dominant companies. The company's recent earnings pressure shows just how much Cisco needs to undergo a transformation. However, Cisco still has plenty of clout in this market, along with long-term growth potential in its newest categories, a massive amount of cash, and one of the strongest dividends around.

After reporting fiscal 2017 Q1 earnings for the period ended Oct. 29 in mid-November, Cisco stock took a hit. The company's sales rose slightly to $12.4 billion (excluding certain product categories that were sold in 2015), up just 1% year over year. Analysts expected the 4% drop in GAAP earnings per share compared with a year ago, but what had the market worried and led to the sell-off was Cisco's guidance for the coming fiscal Q2. The company said it will likely see a 2% to 4% drop in sales, and GAAP earnings per share are expected drop as much as 32% from Q2 2016.

Cisco's management has said the company is in transition and that its growing sales in cloud-based networks and security could eventually offset declines in hardware and traditional product categories such as switching and data centers, which suffered declines in the quarter. Cisco's recent growth in these newer categories is encouraging, showing that this company can remain relevant and continue to thrive in a market focused on cloud computing and the Internet of Things. The transition will take time, though, as these segments are still a relatively small part of the company's total sales, especially in the face of a company like Amazon looking to take market share as quickly as possible.

Why this could be a top dividend stock

While Cisco is in transition and the stock has subsequently lost some ground after this disappointing quarter, it could be a great time to buy into what could be a top dividend stock. During Q1 alone, the company paid out $1.3 billion in dividends. Cisco has a strong recent history of consistently raising its dividend to where it is now at $0.26 quarterly, or about a 3.5% yield at the current price. 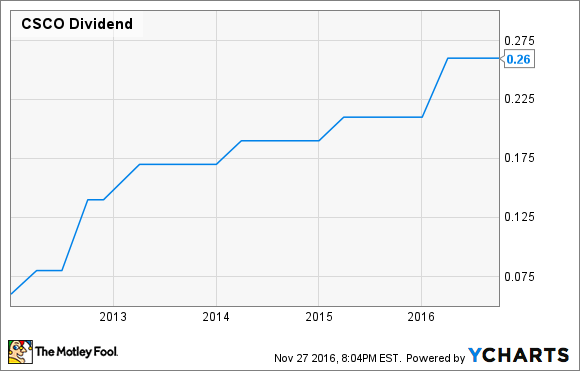 One of the most important aspects of a dividend stock is the expected future growth of the dividend and how safe that dividend looks based on the company's financials. When it comes to cash, Cisco has more than enough to fund its dividend and then some. Operating cash flow for the quarter was $2.7 billion and was actually below what Cisco needed to pay out its dividend, purchase a $1 billion worth of stock, and also spend heavily in investments regarding its transition.

Luckily for Cisco, it's sitting on a mountain of cash. The company's total cash and cash equivalents stood at a whopping $71 billion at the end of the quarter, making it one of the richest companies in the world. While that cash load is impressive, much of it, about $60 billion, is stored out of the country. Like other cash-heavy companies with big foreign stockpiles, Cisco is unwilling to repatriate it back to the U.S. under the current tax plan that would charge the company around 35% to do so.

That could all change very soon. President-elect Donald Trump has signaled for lower corporate tax rates and has proposed a 10% tax rate for these companies to bring their funds to the U.S., which we could see happen as early as 2017. If that happens, it's likely that Cisco would use that opportunity to do just that, which would then mean the company is likely to make some big allocation decisions, one of which is almost certainly to increase its dividend.

While Cisco's dividend is attractive, it's not the only attractive thing about this business right now. Cisco CFO Kelly Kramer noted during the recent earnings call that her team would probably use some of that money not only on increasing the company's dividend, but also in its share buyback program, as well as mergers and acquisitions or other strategic investments. Ahead of this likely influx of capital, Cisco shares are now trading at just 13 times estimated 2017 earnings estimates. For all of these reasons, Cisco stock continues to look like a worthwhile holding through its current transition.