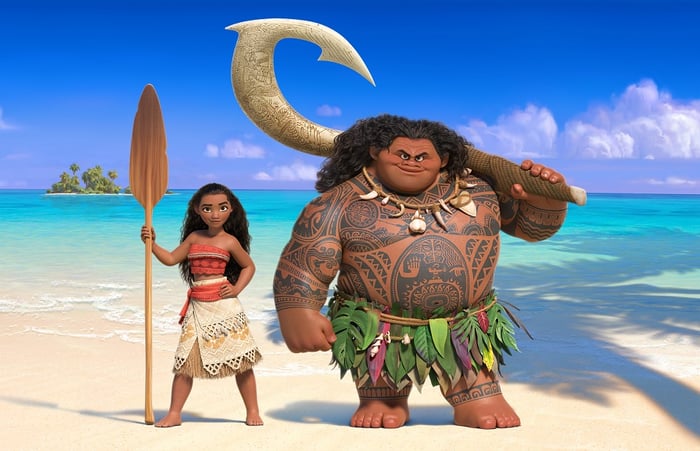 Disney's (NYSE:DIS) new release Moana set a ticket-sales record for a Tuesday night debut, and went on to deliver an impressive five-day Thanksgiving weekend gross of $82.1 million at domestic theaters. The latest picture from Walt Disney Animation Studios landed as the top-performing film over the stretch, beating out Time Warner's Fantastic Beasts and Where to Find Them -- which was in its second week and took in $65.8 million over the same stretch. The Disney animation effort has already crossed the $100 million mark worldwide, with China the only large overseas market where it has debuted, and it looks primed for strong global performance.

Moana stands as one of the best-reviewed films of the year. The picture currently has a favorable review score from 98% of critics on Rotten Tomatoes, and word of mouth and the absence of high-profile competition in the animated film category point to solid performance down the holiday stretch.

Moana isn't hugely significant from an investing standpoint, but the picture's success does play into broader trends that are having an impact on Disney. Following up blockbusters Frozen and Zootopia, the recent release further solidifies Disney Animation Studios' status as a critical and commercial hit factory. The picture also adds new characters to Disney's sizable cast that have the potential to be both consumer-products assets and draws at its theme parks and resorts, keeping the company's film division on pace for record sales.

Strong performance for Moana has Disney on track to deliver the best year in box-office history -- and by a large margin. The film's weekend ticket sales and strong ongoing performance from Marvel Cinematic Universe entry Doctor Strange have brought the company's 2016 ticket sales total to roughly $6.6 billion -- just shy of the $6.89 billion record that Comcast set last year. With Moana looking like it could pass $500 million at the box office, and Rogue One: A Star Wars Story likely to be a massive hit when it releases on Dec. 16, Disney's 2016 ticket sales could surpass $8 billion. If that type of performance is sustainable, it would do a lot to alleviate concerns about turbulence in the company's media networks segment.