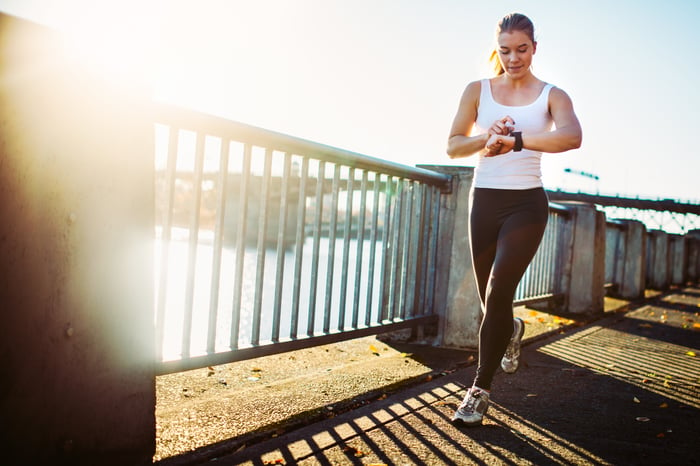 After riding high for several years on a wave of optimism about the long-term potential of the wearables market, the results from 2016 are demonstrating that it may take longer for such devices to gain mass adoption than many consumers and investors initially hoped.

Despite possible setbacks, many tech and consumer companies continue to launch new products and refine existing ones in hopes of profiting from a market that researcher IDC expects to increase to over 213 million device sales annually by 2020. To take advantage of that growth, here are three important companies in the space you should consider buying today.

It's difficult to hold any discussion of wearables -- smartwatches or otherwise -- without mentioning the world's largest tech company. The Apple (NASDAQ:AAPL) Watch so dominates the smartwatch market that its shipments almost equaled those of the next four largest makers in the third quarter.  Two generations into Apple's foray into the smartwatch space though, it remains unclear whether the product can live up to its original hype, at least in the near term.

The Apple Watch 2 offers a few important upgrades over its predecessor, most notably water resistance up to 50 meters and iPhone-independent GPS workout tracking.  That being said, the device still has key limitations like its sometimes inaccurate heart-rate sensor and its inability to track additional biometric data.

For all its faults though, the Apple Watch remains by far the best smartwatch in the market, and many of the issues facing the device stem from industrywide engineering challenges, not unique errors on Apple's part. Sales numbers for the holiday quarter will provide some much-needed insight as to what consumer appetite for smartwatches looks like at the moment. Either way, Apple is one of the clearest beneficiaries of the rise of wearables, and is one of the most obvious ways to invest in the market in general.

Rather than waxing on about obvious fitness tracking plays like Fitbit, discussing Under Armour's (NYSE:UAA) interesting and growing ambitions gives investors a different look into how fitness companies are approaching  the wearables space.

Like Fitbit, Under Armour currently makes a branded fitness tracker: the Band.  However, Under Armour has extended its approach to health data collection several steps further by integrating the Band with a body-fat sensing scale, a chest-strap heart-rate monitor, and its own fitness tracking app to create what the company sees as a comprehensive fitness-analysis ecosystem.

This extends the idea of a health-and-fitness-improving connected device into the realm of multiple devices that can provide a more comprehensive snapshot of the user's health, including day-to-day activity, nutrition, workouts, sleep quality, and body composition analysis. As a semi-competitive athlete myself, the idea of having a complete window into my health and fitness statistics certainly intrigues me, and Under Armour is the perfect company to provide this kind of product. What's more, it has showcased some interesting concepts involving integrating fitness trackers directly into its shirts and shoes,  which clearly connects with the company's broader business model, and could benefit investors over the long-term.

Lastly, the companies designing and manufacturing the technological innards of wearables are another fertile territory for investors. As such, NXP Semiconductor (NASDAQ:NXPI) and its acquirer-to-be Qualcomm (NASDAQ:QCOM) by extension represent another great way to invest in the entire wearables market.

As you saw above, many of today's most popular wearables focus mainly on fitness applications, even among smartwatches whose operating systems enable them to do much more than simply counts steps. This should change in the years to come. Tech companies will find new ways to add value to their products by adding features like mobile payments, a trend which should prove profitable for NFC specialists like NXP Semiconductor. As just one example, marker researcher IHS Technology expects shipments of mobile-payments-enabled devices to explode from 11.6 million in 2015 to a whopping 153.2 million by 2020 as the contactless payments terminals required to process those transactions gain wider adoption. Though it includes other products like those catering to in-car infotainment connectivity, NXP's secure connected devices (SCD) segment,  which includes its NFC products, grew its annual revenue 23%  in the company's most recent fiscal year, a trend that seems likely to continue.

Importantly, Qualcomm's acquisition of NXP Semiconductor will be an all-cash transaction,  so anyone hoping to benefit from the company's future role in the wearables market will need to purchase Qualcomm stock outright to do so. As is the case with the other ways to invest in the continued rise of wearable devices, Qualcomm and NXP Semiconductor remain interesting ways to profit from this long-term secular growth market.