When looking for the best pharma dividend stocks, there are a few metrics investors should look for:

All four categories are critical, but unfortunately, you're unlikely to find a company that tops the charts in all of them.

A company with an extraordinarily high dividend yield, for instance, likely pays that well because investors aren't clear whether the drugmaker can sustain its dividend and/or increase its share price.

Rather than going for the pharma with the highest dividend yield, investors are likely to be better off looking for a company with a lower yield that also has the ability to increase the dividend in the future and the potential to benefit from an increasing share price.

While not strictly a drugmaker (since it sells medical devices and other healthcare goods), Johnson & Johnson (NYSE:JNJ) is what investors are looking for in the best dividend stock in big pharma.

With a dividend yield of 2.9%, the dividend puts a little cash in investors' pockets. It's not as juicy as GlaxoSmithKline's (NYSE:GSK) 4.9% yield or even Pfizer's (NYSE:PFE) 3.7% yield, but Johnson & Johnson's ability to pay its dividend is rock solid, with a payout ratio of 54%. GlaxoSmithKline's payout ratio is a whopping 2,130% based on trailing-12-month dividend payments and cash flow; Pfizer is at 117%.

That's clearly not sustainable. In fact, GlaxoSmithKline's dividend fell from $1.23 per share in the first quarter to $0.46 per share in the fourth quarter, with stops at $0.50 and $0.47 in the second and third quarter, respectively.

Unlike GlaxoSmithKline's variable dividend and Pfizer's dividend, which has been steadily rising since 2010 but still isn't as high as it was in 2008 before it was cut in half to pay for Pfizer's acquisition of Wyeth, Johnson & Johnson offers a dividend that's gone up for the last 53 years, making it a Dividend Aristocrat twice over.

And unlike some companies that make small dividend increases to stay on the aristocrat list, Johnson & Johnson has increased its dividend substantially each year. Over the past decade, the dividend has more than doubled. 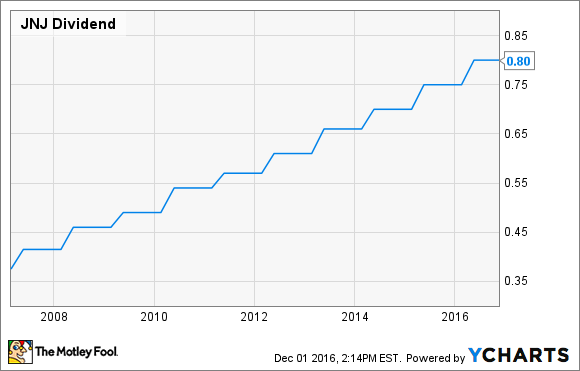 With the first three bullet points above checked off, the only question is whether Johnson & Johnson has the potential to grow its share price.

A 2.9% yield is a good return compared to a bank account, but bank accounts have little risk associated with them. To justify the added risk of holding shares that can go down, investors need to expect a dividend and capital appreciation in the long term.

At the moment, Johnson & Johnson is trading at a reasonable 19.6 P/E, about in the middle of where it's traded over the last five years. While not super cheap, there's rarely a bad time to buy Johnson & Johnson.

As a conglomerate, Johnson & Johnson has the ability to grow earnings faster than revenue by increasing its margins -- especially through acquisitions, where synergies can help cut costs. 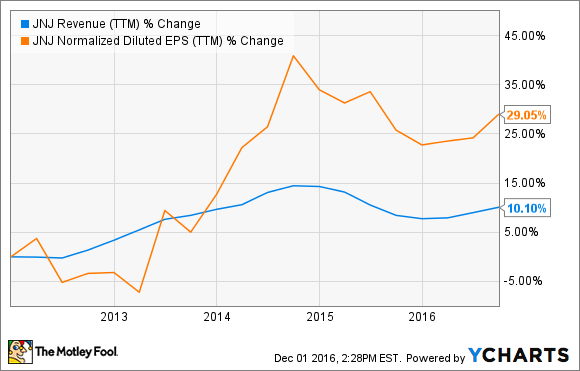 The company also isn't afraid to sell off businesses when they're not helping its bottom line growth. For example, Johnson & Johnson sold its Cordis interventional vascular technology business to Cardinal Health last year, freeing up approximately $2 billion to deploy where Johnson & Johnson thinks it can get a better return on investment.

As long as management continues to stay on course, investors should see solid growth in share price in addition to the dividend, making Johnson & Johnson the best dividend stock in big pharma.