Think you're ready to take Social Security? Today's freedom could come at a higher cost down the road. Image source: Getty Images.

One of the wonderful things about the Social Security retirement benefit is that you can pick an age between 62 and 70 that makes sense for you to start taking your benefit. And while the size of your monthly check will be lower the earlier you take it, the total dollars the average person will collect work out to be about the same.

At the same time, there are a lot of other factors that come into play, including whether you plan to keep working, how much you have in other retirement assets, your health and family medical history, as well as considerations for your spouse. So, even if you think you're ready for Social Security, keep reading; you may not be as ready as you think.

How long you're likely to live could play a role

Millions of Americans will take Social Security at age 62, the soonest they are eligible, with the (often false) conclusion that you'll get more money by claiming as early as possible. The fact is, Social Security is structured so that someone living the average life expectancy would receive roughly the same total dollars, whatever age they first start taking benefits.

But if your health and family history of longevity make it likely you'll live either much shorter or longer than average, you may be better off claiming benefits at a specific age. Here's a table that shows how it breaks down: 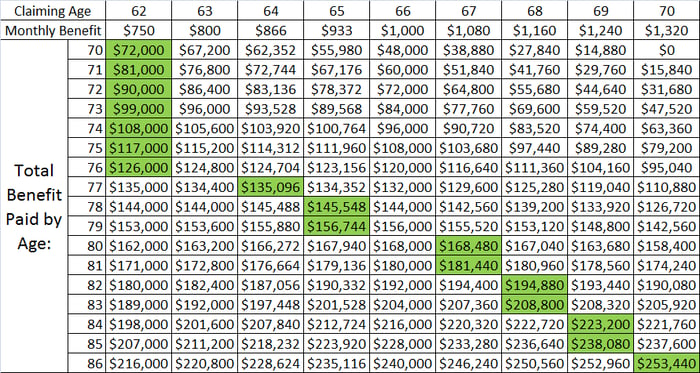 As you can see, there's not a huge difference in how much money you'd get no matter what age you file if you live to around 81 or 82, the average for someone who lives to age 62.

But if you're not likely to live past your mid-70s, it's almost certainly in your best interest to file for Social Security as early as you can, as the table above shows pretty clearly. On the other hand, if you are in good health and come from a family that tends to live late into their 80s or even 90s, you'd end up getting more money by putting off Social Security closer to age 70.

How much can you count on from other retirement assets?

This includes defined benefit plans, such as pensions, as well as retirement accounts, savings, and even home equity. For instance, the Employee Benefits Research Institute estimates that the average consistent 401(k) contributor in their 60s had $209,000 saved in 2014. Based on the 4% withdrawal rule -- which should allow for around 30 years of steady income -- that's about $8,380 per year. When it comes to IRAs, the EBRI says the median IRA account owner aged 60-64 had $175,418. That's good for $7,000 per year.

Will your nest egg be enough to pick up where Social Security leaves off? Image source: Getty Images.

Other assets, including savings and home equity, are also important sources of cash for retirees, particularly later in life when other retirement assets are depleted, and healthcare costs tend to increase. If you don't have other financial assets to help cover these costs, delaying Social Security and building up a bigger buffer may be necessary.

First, if you claim Social Security before your Full Retirement Age (FRA), you may not get your full benefit, even at the reduced level, if your income is above a certain threshold. In 2017, every $2 you earn above $16,920 will cost you $1 in Social Security payments, until you reach your FRA.

Second, if you're still in your prime earning years, your total benefit could be higher if you delay filing, since your benefit is partly based on how much you made in your highest earning years during your working life.

So if you intend to continue working after filing for Social Security, make sure you understand how your earnings will affect your benefit, both now and in the future.

How filing now would affect your family

Many people don't realize that the age you file for Social Security could have a big impact on your surviving spouse after you die. This is because, in many instances, a surviving spouse, such as a stay-at-home homemaker who didn't spend as many years working as their spouse, would likely qualify for a bigger survivor benefit than their own Social Security payment.

Filing early could mean less income for your spouse after you die. Image source: Getty Images.

However, this benefit is based on when you originally file, meaning your spouse would get a smaller survivor benefit if you file early, versus filing late. So if your spouse is likely to outlive you and will count on the survivor benefit after your death, it may make sense to delay when you claim Social Security so that your spouse's monthly income will support them after you are gone.

Quality of live versus quantity of money

Let's face it: Money is important, but so is having as much time as you can. No matter how long we live, it's too short, and at the end of the day, when you take Social Security is as much about time as it is about money. It's up to you to find the right balance between meeting your long-term financial needs and also having the freedom to enjoy your retirement when you're still young and healthy enough to be active.

But at the same time, if filing early could leave you at a higher risk of falling short financially later in life, you could become a burden on your family, particularly when it comes to healthcare. Over two-thirds of people who live to 65 will require long-term care during their life, and 80% of that care is given by family members, often because of financial reasons. So before you file now, make sure you really do consider the financial aspects, and think long term. The price for taking Social Security early could be much higher than you realize later in life.

Think You're Ready for Social Security? Not Until You Read This @themotleyfool #stocks Next Article
Current