The reasons as to why the oil and gas industry saw large gains over the past month are pretty obvious. OPEC's decision to cut production will likely lead to higher prices, and in turn more oil and gas exploration and development spending that will lead to higher revenue for these companies. On top of that, President-elect Donald Trump's proposed policies to open up offshore blocks in both the Atlantic and Arctic for drilling could give the offshore industry some new areas to explore that will likely require some early phase services like Geospace Technologies' seismic detection systems.

In fact, we have already seen some producers announce some new projects that will likely add to these companies' contract backlogs. BP and BHP Billiton have just gotten the green light for the phase 2 expansion of its Mad Dog platform, a $12 billion project that will likely require the services of one of more of the companies here. Considering that this is a massive project that has taken years to develop, maybe the most recent events were the reason why it was announced, but rising oil prices over the past several months have given producers a little more confidence in taking on these kinds of projects.

The bigger question about this recent OPEC production cut and the opening of more American offshore fields is how much of an impact it will have on these companies. Sure, there will likely be a few new projects coming online, but there is a big, new component to the equation to consider: Shale drilling.

As we have seen over the past couple years, the costs for shale development have gone down dramatically as producers figure new ways to make the process more efficient and economical. In a very short time, it has gone from being one of the more expensive sources of oil to one of the least. Also, the time it takes to drill a shale well is much, much faster than offshore work. So there is a very real possibility that cuts from OPEC could quickly be gobbled up by shale producers and leave offshore development with much less future work.

To be clear, the amount of oil and gas that shale could add to the equation isn't enough to put offshore out of business completely, but it will most likely slow the rate of growth in the offshore segment and possible delay its recovery. Something that these companies probably don't want to hear as their stocks have suffered mightily over the past few years. 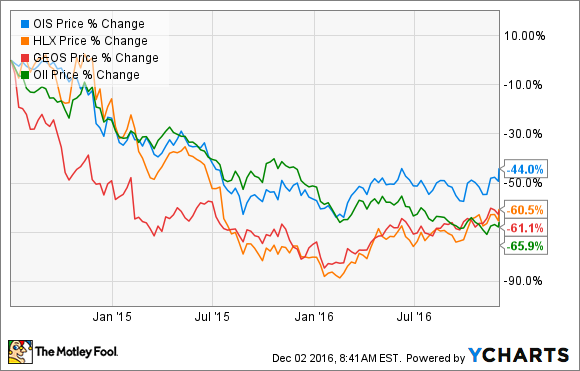 This may be less of an issue for Oil States International as it also has a drilling services business that works on North American shale. Also, Helix Energy Solutions' business is more related to the maintenance and decommissioning of older projects that will likely take place as companies pour a little more money into optimization and production maintenance projects. Geospace Technologies and Oceaneering International, on the other hand, are more tied to the exploration and development phases of the business and may see a much slower recovery.

The oil industry is likely headed for a recovery, but investors shouldn't jump into all of these stocks and expect them to all recover at the same rate. For investors looking at these companies, do keep in mind that some could be stragglers when it comes to a recovery, and this past month's price jumps may be a little premature.