The nutritional supplement provider sank on disappointing guidance and news that its CEO would be stepping down.

The volatility continued last month for nutritional-supplement maker Herbalife Ltd. (HLF 0.47%), with the stock falling 19% according to S&P Global Market Intelligence. Its third-quarter earnings report and the surprise news that CEO Michael Johnson will step down pressured the stock lower at the beginning of the month. 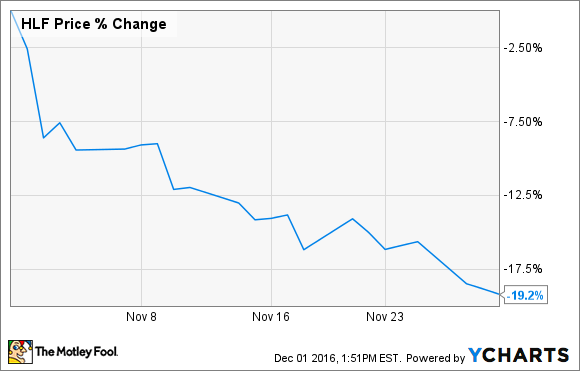 Herbalife stock fell 6% on November 2 after the company's earnings report came out, and it continued to slide throughout the month on ongoing concerns about the business.  The multi-level marketer actually beat earnings estimates at $1.09, posting an adjusted per-share profit of $1.21 -- however, revenue of $1.1 billion was short of expectations at $1.14 billion. CEO Johnson called it another "strong quarter," noting 6% volume growth.

However, the news that Johnson would be leaving the company seemed to overshadow the strong earnings. Johnson, who will be replaced by COO Richard Goudis, was seen as a strong leader who guided Herbalife through an ongoing short-seller attack from hedge fund manager Bill Ackman. Johnson will remain as a chairman of the board.

Herbalife also lowered its sales guidance in the quarter, saying it now expects revenue growth of 1-2%, down from a previous range of 1.5-4.5%. It raised EPS guidance for the year from $4.50-$4.80 to $4.65-$4.85, but issued relatively flat EPS guidance for 2017 of $4.60-$5.00. Through the rest of the month, the stock sank as rival Nu Skin Enterprises reported a disappointing earnings report, and the group of companies sometimes accused of being pyramid schemes were attacked by HBO's John Oliver. Ackman and Herbalife bull Carl Icahn continued to argue publicly over the stock as well. With the election, the incoming CEO, and the usual noise around the stock, expect the volatility to continue.