Those gains didn't come easy, though. In fact, Triumph Group shares sold off early in the month after the company reported weak fiscal Q2 numbers. Q2 2016 earnings of $0.70 per share fell short of Wall Street's expected $0.84 profit, while sales of $874.8 million likewise lagged expectations for $907.8 million in revenue.

All that changed on Nov. 8, however, when Donald Trump won election to the White House, striking a match under the stock prices of aerospace (and other industrials) stocks and sending Triumph Group stock soaring. 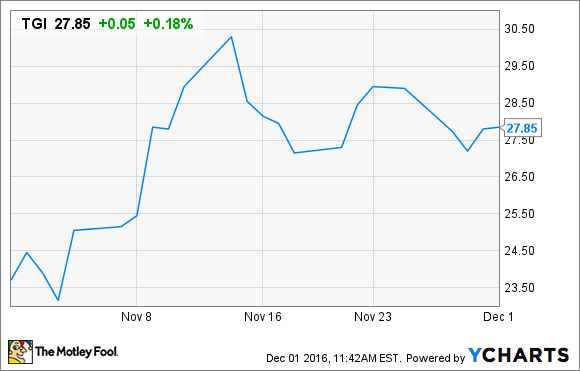 Triumph told investors last month that it expects to earn between $3.15 and $3.45 per share this year. Considering that last year Triumph lost $21.29 per share, those profits probably sound pretty good, but let's put them in context for you.

Assuming Triumph hits the top of its guidance, $3.45 per share will still be less money than Triumph earned in any of the four years preceding its 2015 loss. Likewise, the $3.5 billion to $3.6 billion in revenues that Triumph expects to book this year will be a worse result than the company has booked since 2012 (in which revenue totaled $3.4 billion).

On the other hand, at a share price of just $28, $3.45 per share in profits this year would give Triumph Group stock a price-to-earnings ratio of just 8.1. In other words, the stock is inexpensive.

Just remember that there's a reason Triumph Group stock is so cheap.