November was a good month for the stock market, as investors quickly decided that President-elect Donald Trump is likely to kick-start economic growth through a combination of tax cuts and higher infrastructure and military spending.

Airline stocks performed particularly well in November. Shares of U.S. airline giant United Continental (NASDAQ:UAL) jumped 23% during the course of the month, according to data from S&P Global Market Intelligence. 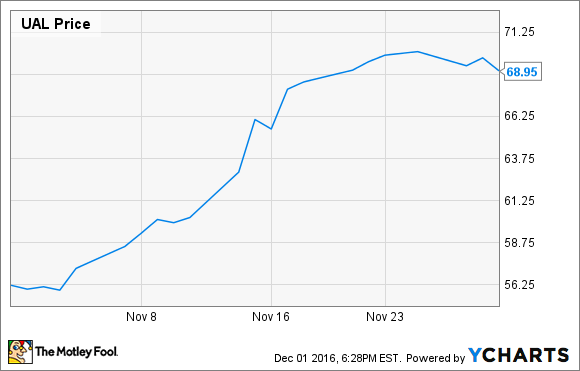 A good portion of United Continental stock's rise last month was driven by the broader election-related market rally. However, investors were also pleased by the strategic plans that United executives revealed during the company's investor day presentation on Nov. 15.

United Continental's management team identified a variety of profit improvement opportunities that could collectively add $4.8 billion in operating profit over the next several years. Some of the most important initiatives include putting more seats on each plane, fixing United's revenue management system, and rolling out a new fare structure that will get rid of carry-on bag privileges for customers buying the cheapest fares.

If these initiatives succeed, they could allow United to leapfrog Delta Air Lines (NYSE:DAL) to become the most profitable legacy carrier by 2020. Right now, Delta's market cap is about 60% higher than that of United, despite United's stronger stock performance in the past few months. This means United Continental stock has a lot of room to run if the company can meet its targets. 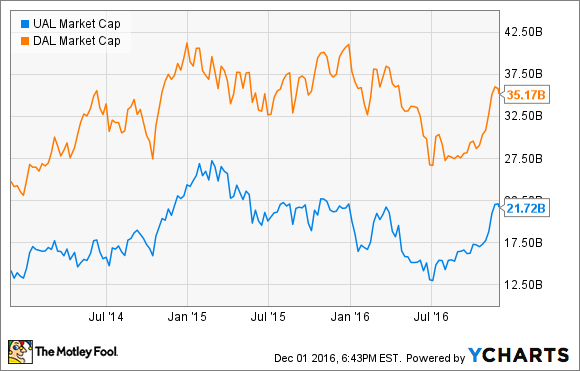 That said, besting Delta's profitability will be extremely challenging. For one thing, Delta is far more dominant in its hub markets than United, which better insulates it from competitive pressures. Furthermore, the entire airline industry is likely to see profit margins decline over the next few years as fuel and labor costs rise while ultra-low-cost carriers continue to enter new markets with rock-bottom fares.

United Continental stock currently trades for 11 times forward earnings. That's not expensive, but it isn't especially cheap, either. Considering that the airline industry is a pretty risky place, investors might want to wait for a pullback before considering an investment in United Continental.