Small-cap stocks, which have a market capitalization of less than $2 billion, don't get as much attention as the massive companies making headlines every day. But value is often lurking where people aren't looking, making small-cap stocks worth watching.

As we enter the final month of the year, three of our contributors have recommendations for small-cap stocks to buy. Read on to learn why Holly Energy Partners (NYSE:HEP), GNC Holdings (NYSE:GNC), and Wingstop (NASDAQ:WING) are small-cap stocks worthy of your hard-earned investment dollars.

Tyler Crowe (Holly Energy Partners): Typically, investing in small-cap stocks means lots of volatility, and that's not just in the stock prices. It also normally means a company with volatile earnings and little chance at a dividend. That isn't the case with Holly Energy Partners, though. Even though the company's $1.9-billion market cap suggests it isn't in the same league as other major pipeline and logistics companies, it sure behaves like one.

For the most part, Holly Energy Partners' asset base isn't overwhelming. It owns mostly pipelines, storage tanks, and some petroleum-processing units that mostly serve its parent company, HollyFrontier (NYSE:HFC). What sets this company apart, though, is how this rather small base of assets is managed.

Holly Energy Partners takes on no commodity price risk, as 100% of its contracted services are fee based, with volume commitments that keep those assets running at or near full capacity at all times. This means that revenue and cash generation is incredibly stable and allows management to effectively manage the balance between growth and financial discipline. That's why, despite its smaller size, it has an investment-grade credit rating on some of its borrowings, something that very few pipeline and master limited partnerships have.

That stable, predictable cash flow also means something else for investors: steady dividend growth. Ever since the company went public in 2004, the company has increased its payout to investors every quarter, and it expects to continue this trend. Today, Holly Energy Partners' stock yields 7.4%. With a high yield and a strong track record of increasing payouts, Holly Energy Partners looks like a small cap-stock that appeals to many investors other than the most aggressive ones.

A retailer with problems

Tim Green (GNC Holdings): Shares of GNC, a retailer that sells vitamins, supplements, and other health and nutrition-related products, have been decimated by a string of terrible results. Same-store sales tumbled 8.5% during the third quarter at domestic company-owned stores, and international revenue dropped by 18.7%. Operating income slumped 29%, but share buybacks helped earnings per share (EPS) fall by just 13%. The stock is down nearly 60% from its 52-week high, and it's down 76% from its peak in late 2013. 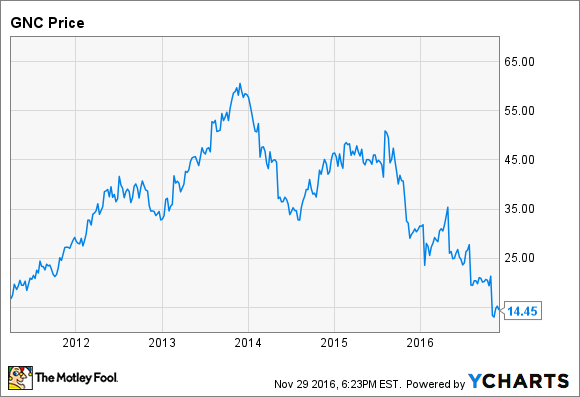 Despite the terrible sales performance, GNC is still profitable. The company has produced GAAP EPS of $2.65 over the past 12 months, putting the trailing PE ratio at a tantalizing 5.5. GNC also pays a dividend, which now yields 5.5% thanks to the collapse in the stock price.

GNC is making changes in an effort to revitalize sales. "During the quarter we made several key management changes to better align our internal resources to address the issues, and we launched a pilot program in seven markets where we have radically changed our pricing methodology and launched a free loyalty program," said GNC CEO Robert Moran. "These changes are not quick fixes but are designed to fundamentally change the way GNC engages with its customers."

GNC is facing some major problems, and sales may continue to decline going forward. That makes the stock risky despite the depressed valuation. But for those looking for a small-cap turnaround play, GNC is worth checking out.

Jamal Carnette, CFA (Wingstop): Over the last decade, there has been one large story in restaurants -- the growth of the fast-casual eateries. Whether it's Chipotle disrupting Mexican food, Panera challenging the traditional sandwich shops, or Shake Shack taking on established burger joints, the new hybrid model has provided early investors with staggering gains. Surprisingly, there hasn't been a bonafide fast-casual competitor in the chicken-wing space... until Wingstop.

And the market has noticed. Shares of the wing purveyor are up approximately 40% year to date. Throughout the first nine months of 2016, Wingstop has grown revenue 16% and net income 76% over last-year's corresponding period as the combination of 12% more system-wide stores and 3.9% same-store-sales growth added to gains.

One thing I'm watching closely is the company's expenses. In the third quarter, the company's cost of sales increased 14.3% over the prior quarter, more than the 14% revenue growth the company reported during the same period. This was during a 1.9% decline in the cost of chicken wings, a huge expense for Wingstop. The company noted the bulk of increased expenses was due to higher labor costs at company-owned restaurants in order to support future growth.

For now, I'm willing to accept management's reason for increased expenses based upon its track record of success, but I'll be watching same-store sales growth closely for verification. Wingstop currently has a $900-million capitalization. I expect the stock to continue to head higher as more customers discover the company and experience its product.